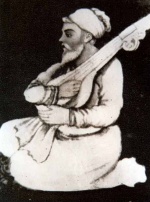 Bhai Mardana with a Rabab

Bhai Mardana, for forty-seven years, travelled with Guru Nanak wherever the Guru went. Whether it was in the bitter cold of the hills or the heat of the deserts, he was never far away from the Guru's side.

The fear of wild animals, hunger, thirst or even the warm thoughts of a loving, comfortable home never brought the five vices - lust, anger, greed, attachment and pride to his mind for he had replaced them with the five virtues - truth, contentment, patience, humility, compassion and love. He was given the honor by the Guru of being a saint and a brother to all. The Guru also included his Bani (verses) in the Sri Guru Granth Sahib.

Mardana who was nine years older than Guru Nanak and was the son of a "mirasi" Muslim. The Mirasis were men who earned their living by entertaining others. They were known as "Bhand" (bards) or "Naqqal" (actors or jesters); they were the great story tellers of Punjab. Often very poor, some were lucky enough to find jobs in the darbars of the feudal rulers and provisional leaders to supplement their incomes.

In the days before established postal services, they often did odd jobs in the villages of Punjab. .....More