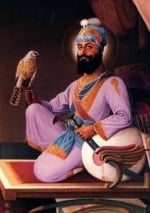 The Guru Sahib was born at village Guru Ki Wadali in district Amritsar on 5 July 1595 and was the only son of Mata Ganga and Guru Arjan, whom he succeeded on 11 June 1606 at the age of only 11 years old.

The young Hargobind received his early education and training from the revered Sikhs leaders of the time Baba Buddha, the first granthi and Bhai Gurdas, the scribe of the Sikh holy script, Guru Granth Sahib.

Guru Hargobind was responsible for wearing two kirpans - one for Miri (temporal protection) and one for Piri (spiritual reasons) and began the rapid and irreversible militarization of the Sikh people. It was due to the tragic martyrdom of his father, Guru Arjan that the sixth Guru changed the Panth into an effective, brave and determined army of religious supporters. .....More