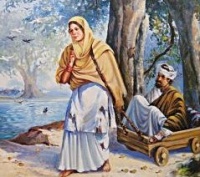 Rajni was a Sikh, a disciple of the Guru. One day she was sitting with her sisters admiring some new clothing they all had received from their father.

The girls were ecstatic and exclaiming how good their father was to them. Rajni observed that all gifts are ultimately from God. Their father was merely an instrument of His greatness.

Unfortunately for her, her father overheard her comment and became very angry. It was not the first time that she incurred his wrath because of her extreme piety.

The infuriated father, believing her to be an ungrateful wretch, married her to a leper with a taunt that he would see how her God would help her lead a normal life. The leper was severely disfigured and a foul smell came from his body.

The poor girl had accepted her fate unchangingly and worked hard to maintain herself and her crippled husband.

She kept repeating the name of God (Naam Simran), and was certain that God was testing her with this turn of events. She was forced to beg for a living. Still she bathed, fed and cared lovingly for her leper husband, never losing faith. .....More