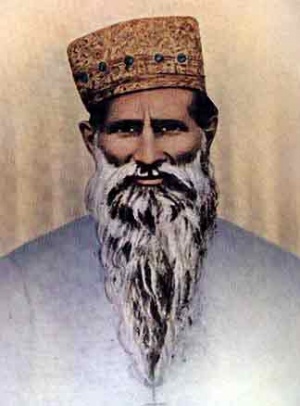 Soami Shiv Diyal, founder of the Radha Soami faith. This person is falsely given the last name 'Singh' many times to associate him with the Sikh religion.

When people of India were resting the sleep of illiteracy and diffidence, Guru Nanak saved these people from the fire of ritualistic beliefs and joined them in the remembrance of One God. Through his Ten Incarnations, Guru Nanak blessed the coward and the meek with kingdoms. With the Tenth incarnation, Guru Nanak carried out the most sensational marvel of gracing the disregarded and meager people by embracing and manifesting them as the "Khalsa Panth" and these people were also given the title of "Panj Piare".

From the moment Guru Nanak Dev Ji started to alter the "Jagat Jalanda" (burning world) by preaching "Sach Ki Bela" (Word of Truth), from that time the Brahman vadi nation of falsehood started foreseeing its eradication. The drama of these people of pretending to be the living image of God was getting revealed because of Guru Nanak's teachings.

Even though the Sikh religion has always been against the ritualistic belief of worshiping idols and graves, some so-called 'Sikhs' still indulge in the above mentioned religious misconduct.

Even today, some Sikhs are going astray from the teachings of the "Shabad Guru" and becoming victims of the false practice of idol and human worship. It is a big grief that the Sikhs who once lived on the edge of the sword and thanked the Almighty God even after having their bodies chopped into little pieces, had their whole families martyred, faced death bravely while being tied to the Catherine wheels, the same Sikh nation is now being misled by teachings of these 'Gurus'.

With the message of - "ਬਿਨ ਕਰਤਾਰ ਨ ਕਿਰਤਮ ਮਾਨੋ ॥" (Do not accept anyone else except God as the Creator of the Universe) the Gurus have done the great deed of joining the Sikhs to One Creator God. But still many immoral 'ways of life' are locking people in the mesh of the perplexity.

The Radha Soami dogma is one such prominently known way of life. The Sikh Gurus have conferred the gift of Gur Mantar and Mool Mantar to their Sikhs and have clearly ruled the following command:

But yet many so-called 'Sikhs' can be seen begging for the 'Gupt-Mantar' at the door of Human 'Gurus'. The Radha Soami faith was started in the city of Agra by a man named Shiv Dayal, who was the husband of a woman named Radha. During the year 1891, Jaimal Singh, a member of a Sikh regiment came in contact of Shiv Dayal and started the shrine of the Radha Soami faith at Beas. At present there are many branches of this faith that are in opposition to each other. These branches of the Radha Soami faith include their centers at Allahabad, Agra, Beas, Saidpur (Dist. Amritsar Sahib). Missionary work of this belief was first started at Saidpur by a person named Baba Teja Singh. Another person named 'Baba Rasila Ram' is the present leader of this cult.

In their attempt to copy the Sikh history, these people have published the biography of Baba Teja Singh under the title of 'Janam Sakhi'. While many doctrines enlisted in this book are against the principals of Gurmat, the author has also published many statements in favor of the Radha Soami faith which are comparable to a Punjabi idiom that translates in English: "To throw an axe at your own foot". This faith promotes the Jain belief of adhering to total peace; but the Sikh Gurus rejected such tenets because they were not in line with their proposed life full of morale and esteem. About the Jain belief, Guru Nanak Dev Ji has stated that the Jain followers take precautions under the false notion of not wanting to kill any living beings such as drinking water without purification in order to not kill the bacteria. About their practices Guru Sahib has stated:

The Janam Sakhi published by the Radha Soami faith also favors another belief of the Jainism which Guru Sahib opposed. The Jains spread excreta in fear of killing a living being, and the Radha Soamis go through the deed of smelling manure to identify their Guru.

On page 62 of the Janam Sakhi published by 'Baba Teja Singh Radha Soami Trust', meanings of Gurbani are presented in a wrongful manner to prtray falseness. The page states that 'Hazoor Satguru' Teja Singh preached to Sangat that one can identify a person living in accordance with Gurbani if he eats and sleeps less, but and the biggest sign comes from that a person's excreta, instead of having a fecal odor woul have a fragrance! For the stool and urine to be free of odor is the biggest sign of an enlightened person.

This story plotted by the missionaries of the Radha Soami faith is worth nothing more than laughter. It is distressing to see Sikhs of Guru Nanak Dev Ji's "Nirmal Panth" following the fake human gurus. Such Sikhs who merely carry the image of the Sikh identity and use Singhs and Kaurs as their last name and turn their backs on Guru Sahib by joining faiths as the Radha Soami, are not worthy of being labeled as Sikhs of the Gurus.

They are forgetting that Guru Sahib taught: