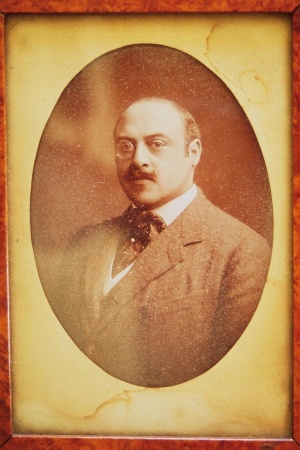 Victor Albert Jay Duleep Singh, Maharaja Duleep Singh’s eldest son, was born on the 10 July 1866. He was christened ‘Victor Albert Jay Duleep Singh’ at Elveden in 1868. Eight and a half months after his birth, the Queen, being the new Prince’s godparent, desired a second christening at the Private Chapel at Windsor Castle. The Prince studied in Eton, [1} before beginning his higher education at Cambridge University where he met his first and true love, Lady Anne Blanche Alice of Coventry, his good friend George’s sister, whom he would later marry.

Family matters took their toll and he with younger brothers and sisters was brushed off to India via Aden. In a confidential memorandum, dated 11th February 1886, W.M.Young the Secretary to the Punjab Government wrote to H.M.Durand the Foreign Secretary in India that one of the reasons Duleep Singh was coming to India was to arrange the marriage of his eldest children. Prince Victor felt distraught; he never quite understood his father or his quarrels with the British Government. On the P&O (Peninsular and Oriental Steam Navigation Company) while in route to India, he openly objected to his father’s plans for an arranged marriage, referring to his father as ‘my idiotic father’. [2]

On his return journey to England, the family settled at their London residence at Holland Park. Prince Victor joined the Royal Military Academy in 1887, getting a special Cadet-ship. The children of Indian extraction were disqualified by parentage from the army under the existing rules, but Queen Victoria bent the rules for her godson. Prince Victor scraped through two terms at Sandhurst, his place in order was 155 in the Merit list. He left Sandhurst the following December and was made a Lieutenant in the 1st Dragoon Guards.

At an early age the Maharajah would take his sons to shooting parties and Prince Victor in particular became a good marksman like his father. An Elveden gamekeeper recalled, "I remember the Maharajah and his two sons Prince Victor and Prince Frederick having a day in Eriswell, the three of them killing over 600 partridges. I was driving the cartridge cart at the time and 1700 cartridges were brought out and for the last drive the stock, now running low was equally divided." [3]

Prince Victor matured well, having a foreign appearance, ‘his olive complexion not darker than an Italian,’ wrote a journalist of the Worcester Herald. He was neither tall in height, but on the contrary rather stout. Taking advantage of his new found freedom and independence, and his convenient residence at Holland Park, Prince Victor became exposed to the gambling and seedy haunts of the bad London circle, becoming a regular visitor to the capital’s gambling houses.

On the 4 April 1898 Lady Anne married Prince Victor, it was a lavish affair, invitations were sent out to every family of note of the time including Lord’s Iveagh, Buxton, Rothschild, De Grey, Carnarvon and Albemarle. The ceremony was held at St. Peter’s, Eaton Square, where so many fashionable weddings of the day took place.

Gertrude Bell, the famous traveller and writer, gave two separate light-hearted accounts of meeting Prince and Princess Victor in 1904 on a leisure cruise. At first it seemed her initial impression of the Prince was quite negative, "I see Prince Dhuleep Singh and his wife lunching here so I imagine they are fellow travellers. He’s an awful little man – I wonder how she could have married him." [4] But her views soon changed once being acquainted with the couple whom she also met on the same cruise again on the following year. On landing at Gibraltar during Christmas 1905 she wrote, "We had plenty of people to play Bridge with, my friends Prince and Princess Victor Dhuleep Singh among them. I travelled with them on the same ship last year and they are remarkably good Bridge players. She is an Englishwoman and he a Mahratta (I think) but more English than the English and though his appearance is strange he is rather a good sort really – if you do not happen to be his creditor."

During the First World War, he was ordered to remain in Paris and not to leave, but shortly after the war ended, Prince Victor found himself again vulnerable to his old gambling habits. Adamant in not going back to them, he would strangely be seen in the Principality of Monaco, in its gambling casino capital of Monte Carlo. On 7 June 1918 Prince Victor died, without any issue. He was buried on 11 June at the Anglican Cemetery high up the hillside above Monte Carlo, with a special service carried out at St. Martin-in-the-Fields at Eton and Trinity College Cambridge, on 26 June.