From SikhiWiki
Revision as of 14:29, 1 January 2011 by Jsu (talk | contribs) (Replaced steel with Sarbloh. They are not the same.)
(diff) ← Older revision | Latest revision (diff) | Newer revision → (diff)
Jump to navigationJump to search 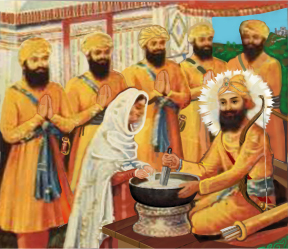 In the history of the Sikh faith, the initiation ceremony has passed through two distinct phases. From the time of Guru Nanak (1469-1539), the founder up to 1699, charan amrit or "pagpahul" was the custom. Charanamrit and pagpahul meant initiation by water touched by the Master’s toe — the charan and pag both being equivalents of the word ‘foot’. In early Sikhism, the neophytes sipped water poured over the Guru’s toe to be initiated into the fold. Where the Guru was not present, masands or local sangat leaders officiated. A reference to initiation by "charan amrit" occurs in Bhai Gurdas, Varan, I.23, born 12 years after the passing away of Guru Nanak.

The practice continued until 1699 when, at the time of the inauguration of the Khalsa, Guru Gobind Singh introduced "khande di pahul", i.e. pahul by khanda, the double-edged sarabloh sword. This was done at Anandpur at the time of Baisakhi festival on 30 March 1699, in a soul-stirring drama. At the morning assembly of the Sikhs drawn from all four corners of India, Guru Gobind Singh, sword in hand, proclaimed, “My sword wants today a head. Let any one of my Sikhs come forward. Isn’t there a Sikh of mine who would be prepared to sacrifice his life for his Guru?” To five similar calls successively made, five Sikhs offered their heads one after the other. They were Bhai Daya Singh, Bhai Mukham Singh, Bhai Sahib Singh, Bhai Dharam Singh and Bhai Himmat Singh. Guru Gobind Singh proceeded to hold the ceremony of initiation to mark their rebirth as new men. 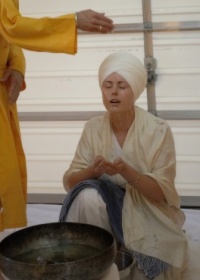 After the five life-giving draughts had been thus administered, the Guru sprinkled the holy liquid into his face gazing intently into his eyes. He then anointed his hair with the nectar. In the same manner, Guru Gobind Singh initiated the other four one by one. At the end, all five of them were given the sarabloh bowl to quaff from it turn by turn the remaining elixir in token of their new fraternal comradeship.

Their worship was to be addressed to none but Akal, the Timeless One. They were ever to keep the five emblems of the Khalsa — kesh or long hair and beard; kangha, a comb tucked into the kesh to keep it tidy in contrast to the recluses who kept it matted in token of their having renounced the world; kara, a sarabloh bracelet to be worn round the wrist of the right hand; kachchha, short breeches; and kirpan, a sword. 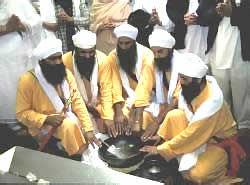 Clean water and sugar or other soluble sweet is placed in the bowl which must be of sarabloh. The five now position themselves around the bowl in the bir asan position (kneeling on the right knee with the weight of the body on the right foot, and the left knee raised). Having so positioned themselves they commence to recite the following: