Difference between revisions of "News about Gurdwara in Baghdad" 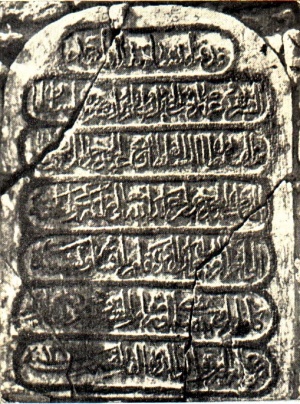 Baghdad (24 December, 2008): In a significant development, the Government of Iraq has decided to rebuild the 15th century Sikh Guru Guru Nanak Dev's shrine which was destroyed in the 2003 war in Baghdad.

Talking to media here at his palace, Iraqi Vice President and senior politician Adil Abd-al-Mahdi has said that the government would rebuild the destroyed Guru Nanak Dev's shrine in Baghdad.

He also thanked the Indian Spiritual Guru Sri Sri Ravishankar for taking up this issue with the Iraqi Government.

The Iraqi Vice President and Sri Sri Ravishankar, who is on a peace mission to Iraq met here and held discussion about rebuilding of the over 500-year-old Sikh shrine.

Talking to media, Sri Sri Ravishankar said, "It was a part of my mission and the Iraqi Government had agreed to rebuild the historical shrine."

The Gurudwara was founded Mohamad Pasha Amoot, follower of Pir Bakol at the time of Guru Nanak's visit to Baghdad in the year 927 AH (1520-1A.D).

Baghdad was visited by Guru Nanak Dev on his way back from Mecca and Madina. He stayed outside the city of the west of Dajala (Tigris) River, about two kilometers north of Baghdad West railway station.

He held discourses with Sajjadanashins (caretaker of mausoleum) of the mausoleums of Abdul Qadir gilani and Bahlol the Wise, who were greatly impressed by his views on God and religion.

After the Guru's departure, they raised a memorial in the form of a platform where the Guru had sat and discoursed. After some time when a room was constructed over the platform, a stone slab with the following inscription in Turki was installed in it. The shrine was completely rubbled during the 2003 war.

In April 2003, it was reported that the Shrine in Baghdad had been damaged in the military hostilities of Iraq.

Punjab Chief Minister Amarinder Singh took up the matter with the US seeking details about the condition of the gurudwara. He wrote to the US Ambassador Robert Blackwill, proposing that former Secretary in the External Affairs Ministry be allowed to visit Iraq for an assessment of the situation.

Currently there are no reports as to the condition of the shrine in Baghdad.

Iraq is keen to rebuild a historic Sikh shrine commemorating Guru Nanak's visit to Baghdad, which had been destroyed by 'fanatics' after the invasion of the country by US-led coalition forces, a top leader said on Friday.

Iraqi National Congress chief Ahmed Chalabi, one of Iraq's prominent leaders, who drove down through the desolate streets of Baghdad to the sacred Sikh site last night under heavy military protection, said 'it has unfortunately been wiped out by fanatics because they thought it was against Islam'.

"It's shameful they cannot respect someone who has millions of followers," he said at the gurdwara site along the river Tigris.

Iraqi officials escorting Chalabi informed him about the original design of the gurdwara that was built alongside the tomb of a Muslim religious leader, which has suffered no damage.

"We will rebuild it," Chalabi said even as he admitted he did not know that a Sikh shrine had ever existed in Baghdad, which houses the Indian embassy.

The Iraqi leader, seen as close to the Bush administration, ruled out the possibility of the gurdwara being destroyed in military fire.

"It was a mortar attack by some fanatic," he said, adding he believed it would have happened after the fall of Saddam Hussein.

News reports during the Iraq war had suggested the gurdwara had suffered damage in the attack, but there has been no official confirmation until now from Iraq about its condition.

The visit to the site revealed complete destruction of the shrine.

Chalabi, who broke the lock at the gate of the shrine's compound to inspect the site, pointed out that the shrine's marble floor had been pulled out and its roof razed to the ground.

According to Sikh history, Guru Nanak, the founder of the faith, visited Baghdad and had a discourse with Bahlol Dana, a sufi teacher.

The gurdwara commemorating the Guru's visit lies near what is now a devastated railway station in Baghdad.

"The Sikh community has contributed a lot to Iraq. They have worked here in railways, construction and a lot of other activities. We respect them and will see to it that this is rebuilt," Chalabi said.

With thanks to Tribune: www.tribuneindia.com

Much has been written about Guru Nanak’s Gurdwara in Baghdad. I would like to add a little more. During his third great travel (1518-1521-Tiji Udasis), Guru Nanak visited some Arabic Muslim countries along with Bhai Mardana. On his way back from Mecca, Guruji came to Baghdad via Medina, Khuram Shahr (Iran), Basra and Karbla. After Mecca, Madina and Karbla are the two other holy shrines of Muslims.

In Baghdad (1520), Guru Nanak and Bhai Mardana put their camp in a graveyard, outside Baghdad town. Here Guruji had religious discourse with Pir Dasat Gir successor and Seikh Behlol and his son. Guru Nanak convinced Pir Behlol, his son and others that there are so many patals (earths) and Akashs (sky). Pir Behlol and his son were so much impressed by Guru Nanak that they became his true devotees along with others.

Swami Anadacharya also mentioned Guru Nanak’s visit to Baghdad and religious discourse with Pir Behlol long ago in his famous book “The Snow Bird” published in 1918 from London. Later, a Punjabi poet translated Swami Anadacharya’s poem in Punjabi entitled “Sil Te Betha Faquir” (a saint sitting on a big stone). Pir Behlol and his son soon started living there with Guruji. They requested Guru Nanak to stay there for some more time. Guruji and Mardana stayed at Baghdad for 4-6 months.

The Queen of Baghdad had no child. By the blessings of Guru Nanak, a son was born to the Queen and she offered a chola (robe) to Guru Nanak prepared by herself, having the hymns of Quaran on it. That chola is still lying in Gurdwara Chola Sahib at Dera Baba Nanak, Gurdaspur district, Punjab. From Baghdad, Guruji came back to India in 1521 A.D. via Kabul, Jalalabad, Turkey; through Khyber Pass to Peshawar and Panga Sahib (Hassan Ibdal) near Rawalpindi in West Punjab.

Guru Nanak visited many other places in Arabic and South East Asian countries such as Tibet, Sikkim, Bhutan, Nepal, Sri Lanka, Indonesia and Thailand. Nobody bothered to preserve these holy places. I had a chance to visit Nepal, Bhutan, Bangladesh, Indonesia, Thailand and a few Arab countries, especially those visited by Guru Nanak and Guru Teg Bahadur. All are in a bad shape. Only a few local people offer some prayers there. Even the SGPC officials may not know those places; some historic shrines have vanished. We need to take care of them to spread Guru Nanak Dev’s message of universal fatherhood or oneness of God. International brotherhood of mankind, love, peace and harmony can also be spread.

Baghdad was, in Nanak's time, a centre of Muslim culture - it was home to pirs and sufi fakirs. Guru Nanak stayed in Baghdad for four months and interacted with the holy men there, one of whom was Bahlol.