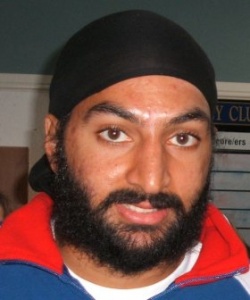 Monty Panesar (born Mudhsuden Singh Panesar, 25 April 1982 in Luton, Bedfordshire), is an Sikh and a famous English cricketer. A left-arm spinner, Panesar plays Test and ODI cricket for England, and county cricket for Northamptonshire. He is the 631st capped player for England, with the number 46 on his ODI shirt.

Born to Indian Punjabi parents, he is the first Sikh to represent a nation other than India in Test cricket. Panesar sports a trademark black patka (a smaller version of the full Sikh turban) while playing and in cricket training. He is a crowd favourite in England, and many fans have worn patkas and fake beards while watching Panesar play.

Despite his embryonic international career Panesar often receives loud cheers whenever he comes on to bat or bowl and when he fields the ball, the latter due to Panesar's history of less than skilful fielding. When first selected for England he was widely said to be a particularly inept batsman and fielder, which may have contributed to this reception; the TMS commentator Henry Blofeld once accidentally referred to him as Monty Python,[1] a mistake possibly encouraged by his comic reputation. However in more recent matches he has lived down these claims, and gained further popularity with his characteristic wicket-taking celebration, which consists of him gambolling down the pitch and high fiving his team-mates.

Panesar, a devout Sikh, has a large supportive family both in England and Punjab, his parents having migrated to England from India in the late 1970s.[2] His father, Paramjeet Singh Panesar, who moved to England in 1979, is a builder. His mother is Gursharan Kaur. Panesar has a younger brother, Isher Singh Panesar, and sister, Charanjit Kaur Panesar. His family lives in Luton. Panesar is a devoted Luton Town F.C. fan and is often seen at matches.[citation needed]

Panesar bowls in the nets at Adelaide Oval

Panesar has been quoted as saying, "I follow Sikhism, and maybe I’ve channelled the discipline that religion creates into my cricket. There’s discipline with any religion, and you can take it into a game or into anything else." (The Sunday Times, August 06, 2006).[3] Away from cricket, Panesar went to Stopsley High School, Luton. He also has a degree in computer science from Loughborough University.[4] Panesar has uncut hair and a full length beard, which is a fundamental part of the Sikh identity and way of life. He won the 2006 Beard of the Year competition run by the Beard Liberation Front which campaigns in support of beards, opposing discrimination against those who wear them. [1] [5]

Nicknames for Panesar include "The Montster", "The Python" (a reference to Monty Python), The "Sikh of Tweak" (probably a humorous reference to Australia national cricket team leg-spinner Shane Warne's (though mispronounced) sobriquet, 'The Sheik of Tweak)', [6] "Montastic", "Parmesan Tony" (an anagram),[7][8] "The Beard to be Feared", or most popular "The Turbanator" (though this can also refer to India national cricket team spinner Harbhajan Singh).

Panesar is regarded as a bright prospect by some commentators including Geoffrey Boycott and most of the TMS team, and has been singled out for high praise by some. Noteworthy praise came from former England head coach Duncan Fletcher, who, although initially reluctant to single out Panesar, described him as "the best finger spinner in the world".[9]

He was selected as a Wisden Cricketer of the Year in the 2007 edition.

Panesar loves training and is becoming renowned for being a fastidious worker, regularly leaving the practice ground after everyone else. According to reports, one day Monty and Australia national cricket team's Mike Hussey spent a whole day in the nets, which shows remarkable determination for a bowler. According to Andrew Strauss, who has captained him in four Tests, Panesar "will be on the ground earlier than anyone, getting (ex-assistant coach) Matthew Maynard to hit catches to him. He will then bowl through most of the net session, before staying out long after most of the guys are back in the comfort of the dressing room, working on his batting, learning new shots, and perfecting those he already has."[10]