Lunch at the Langar: Exploring a Free Kitchen in Delhi based on article by Sarah Rich 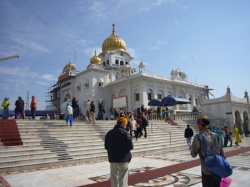 Free-for-all is a term generally used to describe chaos. And chaos is a word one could use to describe much of Delhi. But at the Gurdwara Bangla Sahib kitchen, a Sikh temple which serves meals to around 10,000 people every single day, there's not a trace of chaos. And the food is free. For all.

This week, Alex and I are at the Doors of Perception conference in India, where the theme is "Food and Juice." It's an exploration of food systems worldwide, and the energy required to make them go. On the first full day of the conference, the fifty-odd attendees split into small groups to go exploring the city of Delhi through its food culture. 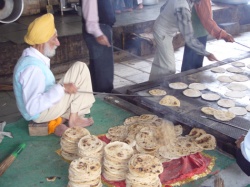 A number of groups focused on the prolific street vendor network, several looked at Delhi's water, and my group of nine went to Gurdwara Bangla Sahib to see how they achieve the daunting task of feeding thousands of people in single a day.

As Debra Solomon told us when introducing the excursion the previous evening: "They do the most exquisite dishwashing ritual you'll ever see." But actually, the Sikh guide who escorted us through the temple grounds told us in no uncertain terms that the kitchen activities are absolutely without ritual. "Cooking food is cooking food," he said, "No ritual. Just cooking." 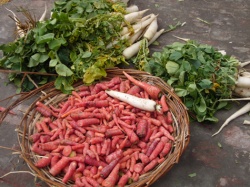 But if it can't be called a ritual, it can surely be called a dance -- a rhythmic, continuous choreography with mounds of dough, cauldrons of lentils, dozens of hands, and an endless stream of hungry visitors.

Every Sikh temple throughout the world has a Langar (Punjabi for "free kitchen"). This is not a soup kitchen. It's not exclusively for the poor, nor exclusively for the Sikh community. Volunteering in the cooking, serving and cleaning process is a form of active spiritual practice for devotees, but the service they provide asks no religious affiliation of its recipients. 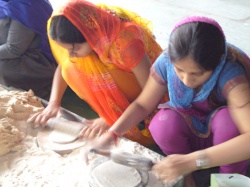 Our guide's chorus was, "Man, woman, color, caste, community," meaning you will be fed here regardless of how you fit into any of those classifications. This spirit of inclusion and equality is reinforced by the kitchen's adherence to vegetarianism, not only because Sikhs are vegetarian, but because others who visit may be, and by serving no meat, they exclude nobody.

The Langar receives funding from wealthier members of the community and through small donations at the temple. Every day they serve chapati and lentil dal, supplemented with vegetables when donations come in from local farmers. On our visit there were ruby-colored carrots -- the short, knobby type we see only at a farmer's market and never at a grocery -- and huge bunches of leafy dark greens, clearly fresh from the ground. 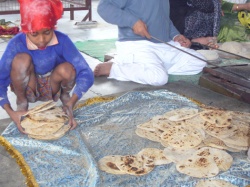 A small boy stacks Chapatis into a basket

The preparations take place in an open air building with stone floors which has been arranged with several preparation stations. In one area, men and women sit together around a huge rectangular platform covered in dough. They roll balls, flatten them into circles, and pile them up to pass over to the griddle built into the floor, where only men sit around with long flippers, turning the white slabs of dough over and over until they acquire dark brown speckles, at which point they flick them off the heat and onto a cloth.

A little boy stacks them up, plops them into a woven basket, and carries them to a metal pot around four or five feet in diameter and nearly taller than him. Everything is magnified ten-fold. One member of our group called the place "psychadelic." 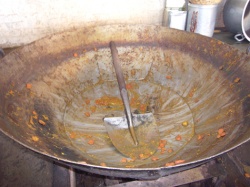 A large shovel used to stir vegetables in the wok

To stir the vegetables in the wok they use a shovel -- the kind you'd used to dig a hole or shovel snow; the ladle for the lentil pot probably has a one-quart capacity; and the wash basins look more like bathing tubs at an ancient bathhouse than dish sinks, with high cement walls around a long, shallow pool. A row of volunteers sits on the ground near the washing area cleaning off metal plates by hand and passing them to the basins for rinsing. Stacked plates pile up along one side, ready for the next seating of eaters. 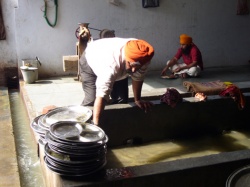 We were invited to join the next round for lunch, so we took seats on the ground on a long row of mats as people filtered in and filled in around us. There were probably 500-600 people present, all assembled within less than five minutes. Down the rows came several volunteers with stacks of clean plates. Next came men with metal pails of dal, ladling a helping onto each plate. 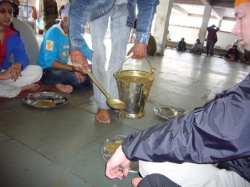 Being served "Dal" (lentils) from a metal bucket

Finally a parade of baskets piled with chapati traveled past open hands. Everybody waited patiently for the plates to fill, and then seemingly by unspoken consensus, people made a quick gesture of blessing and began to eat.

Visitors waiting to be served and to begin their food

The plates were not overflowing and the food was not colorful, but it was delicious, hot, salty, spicy and fresh; and the parade of dal and chapati continued until everyone had had their fill. More volunteers collected used plates from satiated diners and in a short time, the crowd began to disperse. There was no lingering over this meal; another round would soon be under way. 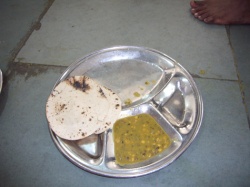 We returned along the rear of the temple, where people lined up for the last bite of the visit: a warm, cookie dough-like substance made of flour, butter and sugar which is handed out in little lumps on banana leaf dishes, and eaten as a blessing. After receiving the sweet, people headed down to huge pool where they splashed hands and face and took a drink of what is considered holy water. The pool is filled with carp, which someone told us keeps the water clean (needless to say, the Westerners in our group didn't partake in this final phase). 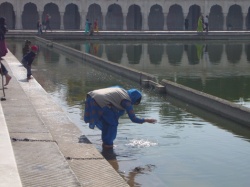 A dip in the sarovar (holy pool)

The Gurwara Bangla Sahib langara has been feeding Delhi residents since 1935. Day in and day out a factory of human hands churns out what one member of our group observed as a day's peace of mind for hungry members of the community. "If you get your day's meal," he said, "you can relax. You can survive." It's not a matter of survival for everyone who eats there -- in fact, most people with whom we shared lunch looked happy and healthy, and had probably come as members of the spiritual community.

But it's there for anyone who needs it, and in a city of 13 million (and rapidly growing), an open, organized, clean, reliable, and free food source couldn't be more valuable. It's a great testament to the stability of a well-organized grassroots effort. While countless hours pass in board rooms and over policy debates to establish government-subsidized and NGO programs for feeding the hungry, a crew of volunteers at Gurwara Bangla Sahib feeds thousands upon thousands of their neighbors with no intervention, no fuss, and no strings attached.