Difference between revisions of "Kikli" 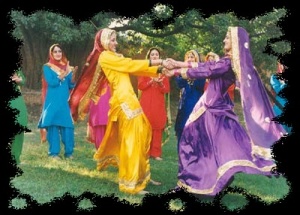 Kilkli, is more of a sport than a dance, is generally popular with young girls. The dance performed in pairs, is a favourite of young girls. It can be done by any even number of performers starting with two. Before beginning the dance, the two participants stand face to face with their feet close to each other’s and their bodies inclined back. Standing in this pose with their hands interlocked firmly and arms crossed the dancers are able to stretch their arms fully and arch their backs to the maximum limit. The dance is performed when the pairs, maintaining this pose, wheel round and round in a fast movement at the same spot with their feet serving as the pivotal points. The girls sing as they swirl around with their colorful ‘orhnis’ or ‘daupttas’ fanning out from their heads and flutering in the wind while their anklets produce tinkling melodies.

There is a rich repertoire of traditional songs available that are used to accompany the ‘kikli’ dance. Most of these songs consist merely of loosely rhyming lines without any underlying theme. One of the examples is: