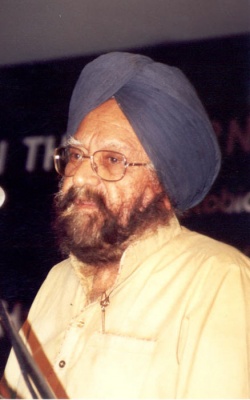 Khushwant Singh has gathered both fans and detractors by the thousands over five and a half decades of prolific writing.

Many things to many people

He is many things to many people. The more you read about him, the hungrier you get. He is the high priest of journalism who can be said to be India's best. he is a free thinker and an international celebrity. Khushwant Singh had become a legend and an icon in his lifetime. He is a lawyer, critic and columnist. He is a prolific writer and historian who people love to hate and one who people may even agree is "not a nice man to know". Yet, you would love to read him day after day to no end.

Khushwant Singh was born in 2 February, 1915 in village Hadali in Khushab district Sargodha, Punjab - now in Pakistan. His family was very rich. His father Sir Sobha Singh had made his money as a builder and contractor who was responsible for constructing many buildings in and around what is today New Delhi. Lady Varyam Kaur was a fine woman and mother. Khushwant Singh attended a modern school where, by his own admission, his distinction was a record in zeros in arithmetic. However he excelled in Urdu. It was, perhaps an early streak of a writer in him. Later on he attended Government college in Lahore. Soon Khushwant was sent to Kings College, Cambridge and the Inner Temple in London.

After qualifying in law, Khushwant returned to India where he set up a legal practice in Lahore. He struggled in practice for several years before the Partition of India in 1947. This forced him to abandon his practice and his family settled in New Delhi where they already owned real estate. Soon after he was offered a job in diplomatic service in the Ministry of External affairs. This first took him to London - a familiar ground to him, and later to Canada. He also served in Paris with UNESCO, to the astonishment of some of his peers to whom diplomatic perks were attractive, Khushwant Singh found a life of 'babudom' to his disliking and left MEA.

He joined All India Radio in 1951 a a journalist. This was just the beginning of the illutrious career of Khushwant Singh. He was founder editor of Yojana from 1951-53. Soon he was editing the prestigious National Herald. Later on he was to edit The Illustrated Weekly of India, a magazine which increased its circulation many folds after he became its editor. Khushwant Singh was also chief editor of New Delhi and editor of Capital's newspaper Hindustan Times.

Khushwant Singh has worldwide readership. He has written for almost all the major national and international newspapers in India and abroad. He's has numerous TV and radio appearances at home and Internationally and has had an extraordinary career as a writer. His book, "A history of Sikhs" remains, to this day, one of the best, well-researched and scholarly works on the Sikhs. It is a classic two-volume book on Sikh History used as a reference by many scholars. He has also written several novels, both fiction and nonfiction, which have been translated into many languages. Khushwant's "Train to Pakistan" won him international acclaim and the Grove Press Award in 1954. He brought history to our doorstep both for Punjabi and non-punjabi speaking people. He wrote the book "Maharaja Ranjit Singh" explaining the Maharaja's secular rule. He also wrote "Fall of Sikh kingdom". His translation of Japji, Hymns of Nanak and the Guru shows his spiritual side. 'From Mind to Supermind' a commentary on the Bhagvad Gita, testifies to his own secular nature. In another book 'Declaring Love in Four Languages, he along with Sharda Kaushki, presents a selection of the finest poems in English, Hindi, Urdu and Punjabi. He is a man for many people in many languages. He has translated Amrita Pritam's poems "Pinjar" (Skeleton) into English.

He is a best selling author of over 80 books and two weekly columns syndicated in over 40 English publications. India Today describes him as "The Capital's best known living monument." In the year 1999, when Sikhs celebrated the 300th year of Khalsa at Anandpur sahib it was estimated that about eight million people visited the city at the time. To the delight of millions of Sikhs, he was honored with "Order of Khalsa" (Nishaan-e-Khalsa), the highest decorum bestowed by the Sikh community.

Khushwant Singh was awarded the Padam Bhushan in 1974. Ten years later, in an act of courage, on June 8, 1984, a day after the attack on the Golden Temple, he drove to Rashtrapati Bhavan and returned the framed citation to the President of India, Giani Zail Singh, also a Sikh, in protest of the storming of the Golden Temple. When he returned to his house, his home became information central for the Sikhs. Every TV channel and radio station from abroad contacted him about the details of the damage to the Golden Temple. It also saw his falling out with the Nehru family. In 2007 the Indian government awarded Singh an even more prestigious honor, the Padma Vibhushan. India's second highest civilian honour.

Khushwant Singh was a member of Parliament, in the Rajya Sabha, from 1980 to 1986. His dry and icy comments frequently landed him in the Soup. Dr. Bideshwar Pathak, founder of Sulabh International, said, "Khushwant's biggest attribute is that he speaks what he feels. He is honest to the extent that he offends even his friends and icons revered by the people. It doen't matter to him that it jeopardizes his chances in life. I think it is the same quality that made Gandhi into a Mahatma." His critics many not agree with this assesment entirely because Khsuwant Singh was the editor of The Illustrated Weekly of India during the time of Emergency rule imposed by Indira Gandhi. He was not very vocal about the matter and to his critics, that made his position less than honest. His son Rahul Singh says, "My father is a foolish politician but emotionally he is honest."

In July 2000, Khushwant received Sulabh Award for 'upholding moral values and being a person of impeccable character and exceptional integrity'. Andhra Pradesh Chief minister Chandrababu presented the award. The function was marked by the release of a book on life of the worthy recipient called "Khushwant Singh: An Icon of our Age". To the delight of thousands of Khushwant followers, External affairs minister Jaswant Singh released the book. This book is a collection of articles by writers of varied backgrounds including IFS Pavan Verma, Solicitor General Soli Sorabjee and Dr Bindeshwar Pathak, the founder of Sulabh International for Social Service.

Khushwant Singh Detests Indian politicians. He laments, "We have so many donkeys as PM".

Khushwant Singh has crossed swords in the courts but he has never acted unlawfully. His writings are passionate and speak his mind and soul. Khushwant has never paid heavily for his writings from his so called Honest Pen. He admits, "There have been dozens of times when I have been dragged to court. In most cases, I was let off without being convicted". Pujab and Haryana Court once hauled him up for an article on Corruption in the Judiciary. Unable to prove he had done anything unlawful, they had to let him off. In December 1995, Khushwant Singh was writing Truth, Love and a little Malice, an autobiography, when the court passed an injunction against him and barred him from Publishing any reference pertaining to Maneka Gandhi, a plaintiff, mentioned in his book.

Khushwant Singh is full of life, which he believes should be enjoyed to the fullest. He is not materialistic. He is a serious man but his casualness portrays his persona s not so serious. He's never a bore and people of all ages feel at home with him. A frank discussion about sex is not taboo to him. It is his openness which has unfairly stuck a label of 'dirty old man' to him. In real life Khushwant is a thorough gentleman. Sex, Scotch and Scholarship, another book by him, is fun to read. When asked about his drinking habit, he admits, "I started drinking at the age of 25. I have never been drunk even once in the last 60 years of drinking." Premium Scotch is his favorite, but he readily admits, "I don't care for champagne. To me it tastes like alcoholic lemondade".

When his book "In the Company of Women" was launched, the occasion was attended by all who happened to be anybody including Pakistani High Commissioner Ashraf Jehangir Qazi. The High Commissioner had brought along his daughter who wanted to meet him. Khushwant, an unorthodox man in his behavior and manner, planted an innocent peck on Miss Qazi's cheek upon greeting her. This caused quite an agitation in Pakistan. Ever vigilant, the mullahs in Pakistan were revolted at the site of a 'kafir' kissing a pure blooded Muslim girl young enough to be his great grand daughter. The High Commissioner, to his discomfiture, was asked to submit an explanation to the Pakistani government. To a critic who pondered if he was anti-Hindu and admired Muslims, he replied, "I am epmhatically not anti-Hindu. I rise to the defense of Muslims because they are far too often discriminated against and I feel we should befriend them. I have no particular admiration for them, only a lot of good will".

Khushwant Singh is a man larger than life. Befitting his accomplishment, he was honored by Guru Nanak Dev university, Amritsar viz. a Doctorate of Literature. The entire senate rose to deafening applause when the Vice-Chancellor introduced Sardar Khushwant Singh to the faculty. Khushwant Singh has been a lawyer, diplomat, critic, journalist, novelist, historian, humorist, naturalist and a politician - all rolled into one.

Above all, I admire Khushwant Singh who kept the persona of a Sikh, as a Sikh should be.

A profile in Dawn News - The Sardar of Hidali [1]