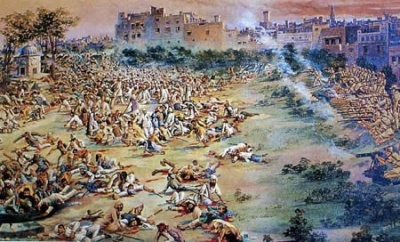 Jallianwala Bagh Massacre, involved the killing of hundreds of unarmed, defenceless Indians by a senior British military officer, which took place on 13 April 1919 in the heart of Amritsar, the holiest city of the Sikhs, on a day sacred to them as the birth anniversary of the Khalsa. Jallianvala Bagh, a garden belonging to the Jalla, derives its name from that of the owners of this piece of land in Sikh times. It was then the property the family of Sardar Himmat Singh (d.1829), a noble in the court of Maharaja Ranjit Singh (1780-1839), who originally came from the village of Jalla, now in Fatehgarh Sahib district of the Punjab. The family were collectively known as Jallhevale or simply Jallhe or Jalle, although their principal seat later became Alavarpur in Jallandhar district. The site, once a garden or garden house, was in 1919 an uneven and unoccupied space, an irregular quadrangle, indifferently walled, approximately 225 x 180 metres which was used more as a dumping ground.

In the Punjab, during World War I (1914-18), there was considerable unrest particularly amoung the Sikhs, first on account of the demolition of a boundary wall of Gurdwara Rakab Ganj at New Delhi and later because of the activities and trials of the Ghadrites almost all of whom were Sikhs. In India as a whole, too, there had been a spurt in political activity mainly owing to the emergence of two leaders Mohandas Karamchand (Mahatma) Gandhi (1869-1948) who after a period of struggle against the British in South Africa, had returned to India in January 1915 and Mrs Annie Besant (1847-1933), head of the Theosophical Society of India, who established, on 11 April 1916, Home Rule League with autonomy for India as its goal. In December 1916, the Indian National Congress, at its annual session held at Lucknow, passed a resolution asking the British government to issue a proclamation announcing that it is the aim and intention of British policy to confer self government on India at an early date." 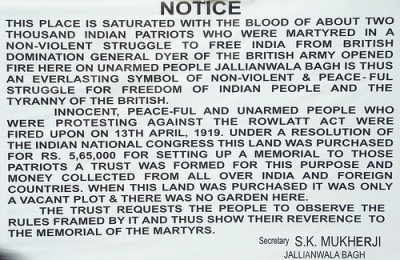 At the same time India having contributed significantly to the British war effort had been expecting advancement of her political interests after the conclusion of hostilities. On the British side, the Secretary of State for India E.S Montagu, announced, on 20 August 1917; the policy of His Majesty's Government, with which the Government of India are in complete accord, is that of the increasing association of Indians in every branch of administration and the gradual development of self-governing institutions with a view to the progressive realization of responsible government in India ..." However, the Viceroy of India Lord Chelmsford, appointed, on 10 December 19l7, a Sedition Committee, popularly known as Rowlatt Committee after the name of its chairman, to investigate and report on the nature and extent of the criminal conspiracies connected with the revolutionary movement in India, and to advise as to the legislation necessary to deal with them. Based on the recommendations of this committee, two bills, popularly called Rowlatt Bills, were published in the Government of India Gazette on 18 January 1919. Mahatma Gandhi decided to organize a satyagrah, non-violent civil disobedience campaign) against the bills. One of the bills became an Act, nevertheless, on 21 March 1919. Call for a countrywide hartal or general strike on 30 March, later postponed to 6 April 1919, was given by Mahatma Gandhi. Jallianwala Bagh Memorial

The strike in Lahore and Amritsar passed off peacefully on 6 April. On 9 April, the governor of the Punjab, Sir Michael Francis O'Dwyer (1864-1940), suddenly decided to deport from Amritsar, Dr Satyapal and Dr Saif ud-Din Kitchlew, two popular leaders of men. On the same day Mahatma Gandhi's entry into Punjab was banned under the Defence of India Rules. On 10 April, Satyapal and Kitchlew were called to the deputy commissioner's residence, arrested and sent off by car to Dharamsetla, a hill town, now in Himachal Pradesh. This led to a general strike in Amritsar. Excited groups of citizens soon merged together into a crowd of about 50,000 marching on to protest to the deputy commissioner against the deportation of the two leaders. The crowd, however, was stopped and fired upon near the railway foot-bridge. 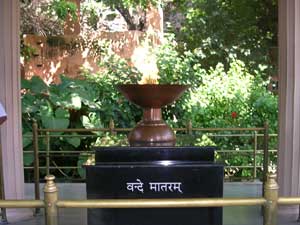 According to the official version, the number of those killed was 12 and of those wounded between 20 and 30. But evidence before the Congress Enquiry Committee put the number of the dead between 20 and 30. As those killed were being carried back through the streets, an angry mob of people went on the rampage. Governmcnt offices and banks were attacked and damaged, and five Europeans were beaten to death. One Miss Marcella Sherwood, manager of the City Mission School, who had been living in Amritsar district for 15 years working for the Church of England Zenana Missionary Society, was attacked. The civil authorities, unnerved by the unexpected fury of the mob, called in the army the same afternoon. The ire of the people had by and large spent itself, but a sullen hatred against the British persisted. There was an uneasy calm in the city on 11 April. In the evening that day, Brigadier-General Reginald Edward Harry Dyer (b. 1864, ironically at Murree in the Punjab), commander 45th Infantry Brigade at Jalandhar, arrived in Amritsar.

He immediately established file facto army rule, though the official proclamation to this effect was not made until 15 April. The troops at his disposal included 475 British and 710 Indian soldiers. On 12 April he issued an order prohibiting all meetings and gatherings. On 13 April which marked the Baisakhi festival, a large number of people, mostly Sikhs, had poured into the city from the surrounding villages. Local leaders called upon the people to assemble for a meeting in the Jallianvala Bagh at 4.30 in the evening. Brigadier-General Dyer set out for the venue of the meeting at 4.30 with 50 riflemen and two armoured cars with machine guns mounted on them. Meanwhile, the meeting had gone on peacefully, and two resolutions, one calling for the repeal of the Rowlatt Act and the other condemning the firing on 10 April, had been passed. A third resolution protesting against the general repressive policy of the government was being proposed when Dyer arrived at about 5.15 p.m. He deployed his riflemen on an elevation near the entrance and without warning or ordering the crowd to disperse, opened fire. The firing continued for about 20 minutes whereafter Dyer and his men marched back the way they had come. 1650 rounds of .303-inch ammunition had been fired. Dyer's own estimate of the killed based on his rough calculations of one dead per six bullets fired was between 200 and 300. The official figures were 379 killed and 1200 wounded. 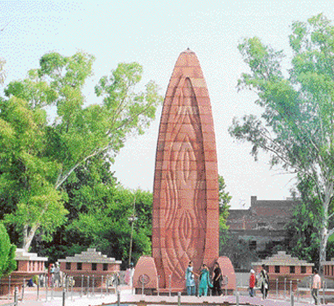 The protest that broke out in the country is exemplified by the renunciation by Rabindranath Tagore of the British Knighthood. In a letter to the Governor General he wrote: "... The time has come when badges of honour make our shame glaring in their incongruous context of humiliation, and I for my part wish to stand shorn of all special distinctions by the side of those of my countrymen who, for their so-called insignificance, are liable to suffer degradations not fit for human beings...." Mass riots erupted in the Punjab and the government had to place five of the districts under martial law. Eventually an enquiry committee was set up. The Disorder Inquiry Committee known as Hunter Committee after its chairman, Lord Hunter, held Brigadier-General R.E.H. Dyer guilty of a mistaken notion of duty, and he was relieved of his command and prematurely retired from the army. The Indian National Congress held its annual session in December 1919 at Amritsar and called upon the British Government to "take early steps to establish a fully responsible government in India in accordance with the principle of self determination."

The Sikhs formed the All India Sikh League as a representative body of the Panth for political action. The League held its first session in December 1919 at Amritsar simultaneously with the Congress annual convention. The honouring of Brigadier-General Dyer by the priests of Sri Darbar Sahib, Amritsar, led to the intensification of the demand for reforming management of Sikh shrines already being voiced by societies such as the Khalsa Diwan Majha and Central Majha Khalsa Diwan. This resulted in the launching of what came to be known as the Gurdwara Reform movement, 1920-25. Some Sikh servicemen, resenting the policy of non-violence adopted by the leaders of the Akali movement, resigned from the army and constituted thc nucleus of an anti-British terrorist group known as Babar Akalis.

The site, Jallianvala Bagh became a national place of pilgrimage. Soon after the tragic happenings of the Baisakhi day, 1919, a committee was formed with Pandit Madan Mohan Malaviya as president to raise a befitting memorial to perpetuate the memory of the martyrs. The Bagh was acquired by the nation on 1 August 1920 at a cost of 5,60,472 rupees but the actual construction of the memorial had to wait until after Independence. The monument, befittingly named the Flame of Liberty, build at a cost of 9,25,000 rupees, was inaugurated by Dr Rajendra Prasad, the first President of the Republic of India, on 13 April 1961. The central 30-ft high pylon, a four-sided tapering stature of red stone standing in the midst of a shallow tank, is built with 300 slabs with Ashoka Chakra, the national emblem, carsed on them. A stone lantern stands at each corner of the tank. On all four sides of the pylon the words, "In memory of martyrs, 13 April 1919", has been inscribed in Hindi, Punjabi, Urdu and English. A semi-circular verandah skirting a children's swimming pool near the main entrance to the Bagh marks the spot where General Dyer's soldiers took position to fire at the gathering.