Difference between revisions of "Jaap sahib" 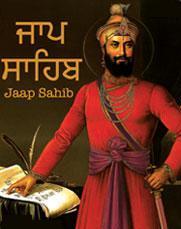 Jaap is the bani (set of hymns) uttered by Guru Gobind Singh Ji, the Tenth Sikh Guru, the Tenth Nanak. It is the first bani recorded in Sri Dasam Granth Saahib Ji from Page 1. It is one of the Five Banis recited by most Sikhs each morning and the bani that the Panj Pyare recite while preparing Amrit on the occasion of Amrit Sanchaar (Sikh Initiation), a ceremony held to admit initiates into the Khalsa Brotherhood. It is the second bani of the five in the daily morning prayer routine of a Sikh.

This bani has the same place in the Sri Dasam Granth Saahib Ji as the Japji Sahib has in the Sri Guru Granth Sahib Ji.

Jaap Sahib is made up of 199 verses and is the first Bani of the Sri Dasam Granth Dasam Granth Saahib Ji (p.1-10).

The Jaap Sahib begins with the words:

This line is clearly intended to authenticate Guru Gobind Singh Ji as the author of the Sri Dasam Granth Saahib Ji.

Jaap is a Sanskrit word which means "to utter in a low voice, whisper, mutter (especially prayers or incantations); to invoke or call upon in a low voice." The form of the word here is Japu, which makes it a noun, meaning "meditation on nothing but the Truth; ('God') (or The True God)."

The below baani is written as Greetings to One god

Waheguru I am writing below baani with your grace

Waheguru victory to you

Name of Baani. Note this is a difficult baani to remember given it is written with special words which repeat themselves and are highlighted in Orange below.

This helps in increasing readers brain memory and increase focus into Baani as if you lose focus(dhyaan) the line where you are reading, you will get reset backwards

Below is chandh made of 6 lines. Waheguru with your Kirpa I wrote below lines

No outline or sign is visible about Waheguru or Akal Purakh. Neither any caste or status is known.

The looks, color or outline , the appearance of Waheguru or akalprakh cannot be told by anyone.

You can only tell this about Waheguru that Waheguru is a figure which doesn’t go anywhere, it is a “experience” in form of light that is self illuminating.

You can also do a simple math like this about Waheguru that Crore or 10 million kings like Indra (kings of god) report into a shah and than all those such shahs report into Waheguru :-) Note: shah is a designation for someone which means multiple kings or raja’s Report in to him. These designations were designed in middle eastern nations and during Mughal rules in 10 -17 Th. centuries.

Three regions (land , water and air) king, God’s of heavens, human beings and all forms of life, waheguru is beyond all these levels. This is what even a small twig in forest has also realized and says it.

Waheguru all your different names which this world calls you, actually are so many (countless) that who can actually account and say all of them without missing even one? ;-) . Human beings can only say your different names from all the things you have done in history through taking in accounts various deeds you did in past by sending your powers as different avatars e.g. Ram, Krishan etc. 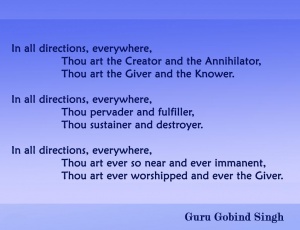 The language of Jaap, is close to the classical (languages of India) with words and compounds drawn from Sanskrit, Brij Bhasha and even Arabic and Persian. The contents of Jaap Sahib, are divided into various Chhands bearing the name of the related meter according to the then prevalent system of prosody in India.

Most of the verses point to the fact that one can only describe God by describing what God is not. As all these verses are in the form of rhymed couplets, the vocabularly and ingenuity of the poet are superb. The opening verse is typical:

"Thou hast no form or feature,
No caste or lineage;
None can describe Thy appearance,
Colour, mark or garb."

There is an all inclusiveness and universalism that keeps coming to the surface.

"Thou art the source of all light,
And the object of all praise;
Thou art the supreme Lord of all,
And the moon of the Universe."

"Perfect is Thy discernment.
All turn to Thee for refuge.
Thou art the Great Companion;
Thou art the sure Providence."

The fervour of the true Bhakta comes out in hailing the immortal as man's companion. Something of the devoutness of the Guru's nature comes to a climax in the concluding verse:

"Thou fillest and feedest the whole universe,
Thyself self-existent, auspicious and united with all.
Thou art the embodiment of mercy;
Thou art the deliverer from birth and death.
Thou art man's constant Companion.
Everlasting is Thy glory!"

Among the thousand names (used for God) there are seventy-five names also used by Muslims. Only a few of these, such as Rahim and Karim, Razakai (Nourisher), Aruv (Pardoner), and Salamai (Peaceful) are among the Muslim's ninety-nine names of Allah, but all the names used would be familiar to Punjabi Muslims. The Mohammadan ear would surely delight in Allah and Nirsharik; Karimur Rahim; Husnul Chirag, Garibun Niwaz; Kamal Karim; Rajak Rahim; Bahistun Niwas; and many such others.

The immortal One is, for Guru Gobind Singh, sometimes the 'wholly Other,' far beyond human comprehension, before whom man can but bow again and again. As the Guru keeps saying what God is not, we may well wander how there can be any communication with that which is so undefinable. The answer is, of course, that God's grace has offered companionship to man, so that man does not have to understand, but only to accept and adore.

Sikhism offers a new path of salvation in addition to the traditional paths of knowledge, work and devotion - the path of Naam (the Name). Meditation on Name produces Wismad, wonder; and the object of such poetry as the Japp Sahib is the creation of the mood of asthetic ecstasy: Sher Singh in the Philosophy of Sikhism writes:

"It is the poetry and the music of the contents of the Granth, revealing simple and direct truths, which charm a reader of Gurbani...and can bring peace to the soul." "It is the aesthetical insight leading man through appearence to reality." Meditation on the Name is fundamental to Sikhism, and so in this opening hymn of the Dasam Granth, men are given a thousand names on which to meditate. 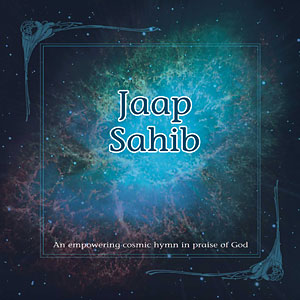 Jaap Sahib is a rhythmic hymn composed like a necklace of pearls and gems, beauteously arranged around a string: the string is the Supreme God; the pearls and gems are His attributes, excellences, and glories. It basically helps reader do a daily Greetings to Waheguru in 199 verses, just like we do hello to each other. The glories sung by Guru Sahib revolve around the following attributes of God: 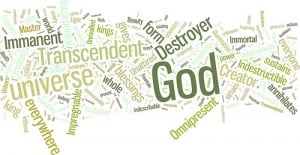 What God is? Read Jaap Sahib