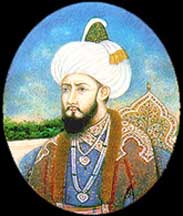 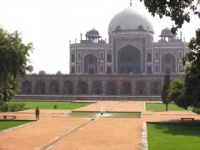 Humayun (1508 – 1556) was the second Mughal Emperor to rule modern Afghanistan, Pakistan, and parts of northern India from 1530–1540 and again from 1555–1556 When Babur died, his son Humayun (1530-56) inherited a difficult task. He was pressed from all sides by a reassertion of Afghan claims to the Delhi throne, by disputes over his own succession, and by the Afghan-Rajput march into Delhi in 1540. He fled to Persia, where he spent nearly ten years as a guest at the Safavid court of Shah Tahmasp. In 1545 he gained a foothold in Kabul with Safavid assistance and reasserted his Indian claim, a task made easier by the weakening of Afghan power in the area after the death of Sher Shah in May 1545, and took control of Delhi in 1555. An avid astrogist he died tripping on the steps of his observatory, as he hurried to answer the call to prayers.