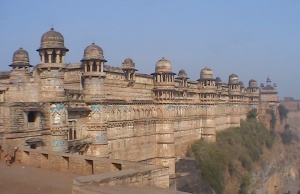 Gwalior is a city in Madhya Pradesh in India. It lies 76 miles (122 km) south of Agra, has a population of over 12 Lakh. The Gwalior Metropolitan area is 46th most populated area in the country. City is named after a Sage called Gwalipa. Gwalior occupies a special mention in India's medieval history and freedom struggle. City also enjoys unique position with regards to education and boasts of several colleges and schools well known across the country.

At the heart of Gwalior is its fortress (Gwalior Fort), built by Raja Man Singh Tomar, of the Tomar dynasty. This formidable structure had the reputation of being one of the most invincible forts of India. It occupies an isolated rock outcrop. The hill is steepended to make it virtually unscalable and is surrounded by high walls which enclose buildings from several periods. The old town of Gwalior lies at the eastern base of the fortress. Lashkar, formerly a separate town that originated as a military camp, lies to the south, and Morar, also a formerly separate town, lies to the east. Gwalior, Lashkar and Morar are presently part of Gwalior Municipality.

It was to this fort in Gwalior that Guru Hargobind was sent when on his release he also secured the freedom of 52 Hindu rajas (kings).