From SikhiWiki
Revision as of 00:23, 30 December 2008 by Allenwalla (talk | contribs) (One who recognizes bad and good as one and the same - in this way he is absorbed into the Lord and Master-a hard one to get, as we voice complaints, the sweepers were heard in Pakistaan yesterday as ')
(diff) ← Older revision | Latest revision (diff) | Newer revision → (diff)
Jump to navigationJump to search 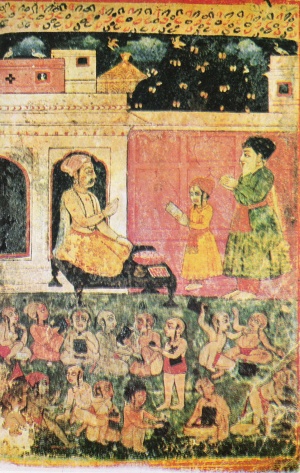 When young Nanak was seven years of age, his father, as was the tradition among the Hindu Khatri caste, asked the village astrologer to select an auspicious time for the commencement of the boy's education. The schoolmaster thought the time had arrived. The school appears to have been a humble one, and the tuition fees not exorbitant. Kalu's wife and not, as in modern times, the village moneylender was the custodian of the wealth of the house. Kalu took from her a coin corresponding to three farthings of English money, some betel-nut, and rice, and presented them to the schoolmaster along with his son.

In India wooden tablets painted black are employed in teaching children the letters of their language. The schoolmaster writes the letters with a kind of liquid chalk on the tablet; and the children repeat their names aloud with much noise and energy. The schoolmaster wrote the alphabet for Nanak, by the end of the day Nanak had copied it from memory.

It is said that on that occasion the young Guru made an acrostic on his alphabet. As in similar compositions in other languages, the letters were taken consecutively, and words whose initials they formed were employed to give metrical expression to the Guru's divine aspirations, his tenets, and his admiration of the attributes of the Creator.

The acrostic, called the patti or tablet in the Raag Asa, is as follows:

One Universal Creator God. By The Grace Of The True Guru:

Sassa: He who created the world, is the One Lord and Master of all.

Those whose consciousness remains committed to His Service - blessed is their birth and their coming into the world. ||1||

O mind, why forget Him? You foolish mind!

When your account is adjusted, O brother, only then shall you be judged wise. ||1||Pause||

Eevree: The Primal Lord is the Giver; He alone is True.

No accounting is due from the Gurmukh who understands the Lord through these letters. ||2||

Ooraa: Sing the Praises of the One whose limit cannot be found.

Those who perform service and practice truth, obtain the fruits of their rewards. ||3||

Nganga: One who understands spiritual wisdom becomes a Pandit, a religious scholar.

One who recognizes the One Lord among all beings does not talk of ego. ||4||

Kakka: When the hair grows grey, then it shines without shampoo.

The hunters of the King of Death come, and bind him in the chains of Maya. ||5||

Khakha: The Creator is the King of the world; He enslaves by giving nourishment.

By His Binding, all the world is bound; no other Command prevails. ||6||

Gagga: One who renounces the singing of the songs of the Lord of the Universe, becomes arrogant in his speech.

One who has shaped the pots, and made the world the kiln, decides when to put them in it. ||7||

Ghagha: The servant who performs service, remains attached to the Word of the Guru's Shabad.

One who recognizes bad and good as one and the same - in this way he is absorbed into the Lord and Master. ||8||

Chacha: He created the four Vedas, the four sources of creation, and the four ages - through each and every age, He Himself has been the Yogi, the enjoyer, the Pandit and the scholar. ||9||

Chhachha: Ignorance exists within everyone; doubt is Your doing, O Lord.

Having created doubt, You Yourself cause them to wander in delusion; those whom You bless with Your Mercy meet with the Guru. ||10||

Jajja: That humble being who begs for wisdom has wandered begging through 8.4 million incarnations.

Jhajha: O mortal being, why are you dying of anxiety? Whatever the Lord is to give, He shall keep on giving.

He gives, and gives, and watches over us; according to the Orders which He issues, His beings receive nourishment. ||12||

Nyanya: When the Lord bestows His Glance of Grace, then I do not behold any other.

The One Lord is totally pervading everywhere; the One Lord abides within the mind. ||13||

Taynka: Why do you practice hypocrisy, O mortal? In a moment, in an instant, you shall have to get up and depart.

T'hat'ha: Peace pervades within those who link their consciousness to the Lord's Lotus Feet.

Those humble beings, whose consciousness is so linked, are saved; by Your Grace, they obtain peace. ||15||

Dadda: Why do you make such ostentatious shows, O mortal? Whatever exists, shall all pass away.

So serve Him, who is contained and pervading among everyone, and you shall obtain peace. ||16||

Dhadha: He Himself establishes and disestablishes; as it pleases His Will, so does He act.

Having created the creation, He watches over it; He issues His Commands, and emancipates those, upon whom He casts His Glance of Grace. ||17||

Nanna: One whose heart is filled with the Lord, sings His Glorious Praises.

One whom the Creator Lord unites with Himself, is not consigned to reincarnation. ||18||

Taynka: The terrible world-ocean is so very deep; its limits cannot be found.

T'hat'ha: In all places and interspaces, He is; everything which exists, is by His doing.

What is doubt? What is called Maya? Whatever pleases Him is good. ||20||

Dadda: Do not blame anyone else; blame instead your own actions.

Dhadha: His power established and upholds the earth; the Lord has imparted His color to everything.

His gifts are received by everyone; all act according to His Command. ||22||

Nanna: The Husband Lord enjoys eternal pleasures, but He is not seen or understood.

I am called the happy soul-bride, O sister, but my Husband Lord has never met me. ||23||

Pappa: The Supreme King, the Transcendent Lord, created the world, and watches over it.

He sees and understands, and knows everything; inwardly and outwardly, he is fully pervading. ||24||

Faffa: The whole world is caught in the noose of Death, and all are bound by its chains.

By Guru's Grace, they alone are saved, who hurry to enter the Lord's Sanctuary. ||25||

Babba: He set out to play the game, on the chess-board of the four ages.

He made all beings and creatures his chessmen, and He Himself threw the dice. ||26||

Bhabha: Those who search, find the fruits of their rewards; by Guru's Grace, they live in the Fear of God.

The self-willed manmukhs wander around, and they do not remember the Lord; the fools are consigned to the cycle of 8.4 million incarnations. ||27||

Mamma: In emotional attachment, he dies; he only thinks of the Lord, the Love of Nectar, when he dies.

As long as the body is alive, he reads other things, and forgets the letter 'm', which stands for marnaa - death. ||28||

Yaya: He is never reincarnated again, if he recognizes the True Lord.

Rarra: The Lord is contained among all; He created all beings.

Having created His beings, He has put them all to work; they alone remember the Naam, upon whom He bestows His Grace. ||30||

Lalla: He has assigned people to their tasks, and made the love of Maya seem sweet to them.

We eat and drink; we should endure equally whatever occurs, by His Will, by His Command. ||31||

Wawa: The all-pervading Transcendent Lord beholds the world; He created the form it wears.

He beholds, tastes, and knows everything; He is pervading and permeating inwardly and outwardly. ||32||

Rarra: Why do you quarrel, O mortal? Meditate on the Imperishable Lord, and be absorbed into the True One. Become a sacrifice to Him. ||33||

Haha: There is no other Giver than Him; having created the creatures, He gives them nourishment.

Airaa: He Himself created the world; whatever He has to do, He continues to do.

Nanak appears to have continued to attend school for some time. One day he was observed to remain silent, and not apply himself to his books. The schoolmaster asked him why he was not reading. Nanak inquired, 'Art thou sufficiently learned to teach me?' The schoolmaster replied that he had read everything. He knew the Veds and Shastars,[1] and he had learned to cast up accounts, post ledgers and daybooks, and strike balances. Upon this Nanak said, 'To your accomplishments I prefer the study of divine knowledge'. He then composed the following hymn:

Burn emotional attachment, and grind it into ink. Transform your intelligence into the purest of paper.

Make the love of the Lord your pen, and let your consciousness be the scribe. Then, seek the Guru's Instructions, and record these deliberations.

Write the Praises of the Naam, the Name of the Lord; write over and over again that He has no end or limitation. ||1||

O Baba, write such an account, that when it is asked for, it will bring the Mark of Truth. ||1||Pause||

There, where greatness, eternal peace and everlasting joy are bestowed, the faces of those whose minds are attuned to the True Name are anointed with the Mark of Grace.

If one receives God's Grace, then such honors are received, and not by mere words. ||2||

Some come, and some arise and depart. They give themselves lofty names.

Some are born beggars, and some hold vast courts.

Going to the world hereafter, everyone shall realize that without the Name, it is all useless. ||3||

I am terrified by the Fear of You, God. Bothered and bewildered, my body is wasting away.

Those who are known as sultans and emperors shall be reduced to dust in the end.

O Nanak, arising and departing, all false attachments are cut away. ||4||6||

Upon this the schoolmaster became astonished, paid Nanak homage as a perfect saint and told him to do what he pleased. Nanak, having thus shown his scholastic proficiency, left school and took to private study and meditation. He remained for long periods in the same attitude, whether sleeping or waking, and associated continually with religious men.