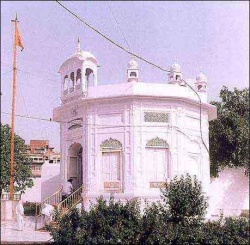 Gurdwara Thada Sahib in Amritsar is situated to the north of Akal Takht Sahib. This is where the ninth Guru, Guru Tegh Bahadur rested when arriving from Baba Bakala to pay his respects to Darbar Sahib soon after he was announced as the next Guru. The custodians of the Harmindar Sahib closed the doors on the Guru to safeguard their vested interests. This is the place where the Guru sat and prayed a while when the Mahants had barred his entry into Harminder Sahib. "Thara" means a raised platform of Masonry.