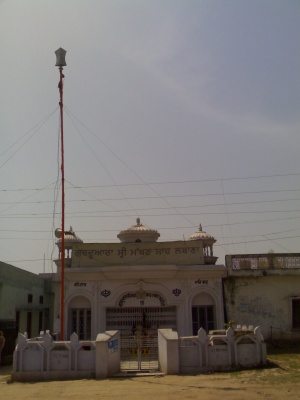 Gurdwara Sri Makhan Shah Labhana, is a new, modern and distinquished Gurdwara Sahib which is situated on the national highway NH1A in Barnoti town, though it is not associated with any visit by one of the Dasvin Patishah's (Sikh Gurus), some event in their life (a battle or a visit to the site or town) during the days of the Earthly human Gurus; the days of Banda Bahadur; or the times of Mughal or Afgani oppression that brought so much turmoil to the mountainous regions of the Sikh Raj of Maharaja Ranjit Singh.

Even though there was never a visit by Baba Makhan Shah Labana to Barnoti, the Sangat of the area named its new Gurdwara after the Labana Bania (trader) who is well known for his part in finding Guru Tegh Bahadur Baba Bakala (he actually proclaimed Tegh Mall/ Tegh Bahadur the real or Sat Guru from the rooftops of Bakala.

Guru Tegh Bahadur who placed his life on the line in and attempt to save the beloved Hindu Pandits of Kashmir and whose Martyrdom at the orders of Aurangzeb played such an important role in the Guru's young son Guru Gobind Singh ji's becoming the Dasvin Nanak (on the same day, November 11th, that his father went down in history as the Hind ki Chaddar; his later creation of the Khalsa; the Panj Pyare; Amrit Samachar and the very names Kaur and Singh with which each Sikh who freely chooses the Panth of the Khalsa and becomes a Sant-Soldier as a Khalsa dons the Five Kakkars, has such historical significance to the lands and the hills of the area that the local Sangat became one of the very few Sangats to name their Gurdwara after a man other than one of the Sikh Gurus, Baba Makhan Shah Labana.