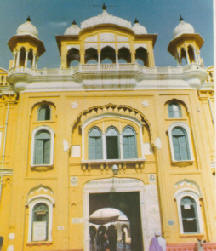 This shrine representing the home of Baba Kalo and Mata Tripta, father and mother respectively of Guru Nanak Dev, where the Guru was born, was established by Baba Dharam Chand (1523-1618) son of Baba Lakhmi Das and grandson of Guru Nanak Dev. The shrine must have been established before the end of the sixteenth century because Guru Arjan Dev (1563-1606) is believed to have visited it. Its present building comprising a square, domed sanctum with a rectangular pavilion attached to it within a vast walled compound was built by Maharaja Ranjit Singh (1780-1839).

Several other buildings were added after the S.G.P.C. took over control on 21st February 1921, the day following the massacre of 150 to 200 Sikh pilgrims by assassins hired by Maharit Narain Das abetted by the British Commissioner of Lahore Division. The traditional fair to celebrate birth anniversary of Guru Nanak Dev continued with great eclat upto 1946, but since 1947 it has been a tame affair. In the beginning, the Pakistan government had permitted 15 Sikhs to stay at Nankana Sahib to carry out routine services at the shrine, but their number was reduced to a bare five in 1968 and still later to a solitary Granthi who maintains a token attendance with the help of some sahajdhari (unbaptised) Siridhi Sikhs. Thrice a year, on Baisakhi (April), death anniversary of Maharaja Ranjit Singh (June) and birth anniversary of Guru Nanak Dev (November), Pakistan government allows Sikh jathas, a few hundred strong each, to visit this and other shrines at Nankana Sahib, Panja Sahib and Lahore. According to Waliullah Khan, Sikh Shrines in West Pakistan, there is a sacred relic, Chola Sahib, preserved here. It is a cloak with Quranic verses embroidered on it supposed to have been presented to Guru Nanak Dev by the ruler of Baghdad during the Guru's visit to that city. If this is true (because our older sources do not make any mention of it), it is a fake relic, because Chola Sahib believed to be the real one is preserved at Dera Baba Nanak in Gurdaspur district of the Indian Punjab.