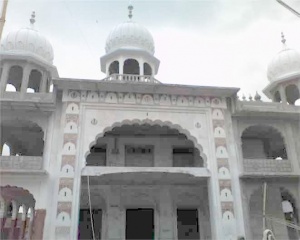 GURUDWARA BAL LILA MAINI SANGAT , PATNA (Bihar) [1] in a narrow lane close to Takht Sahib marks the house where Raja Fateh Chand Maini lived. His childless Rani had developed special fondness for the young Gobind Das, who, too, often came here to sit in the Rani\'s lap giving her immense delight and spiritual solace. She fed the Sahibzada and his playmates, at this demand, with boiled and salted gram. Even now boiled and salted gram is served as prasad (consecrated food) in this Gurdwara, which, unlike the other shrines in Patna Sahib, is served by Nirmala Sikhs. A wood carving on the old front door is dated Assu sudi 1, 1725 Bikrami corresponding to 28th August 1668, but the hall housing the sanctum and other blocks of rooms in the inner compound have been reconstructed during recent decades

Gurudwara Bal Leela is also called as Maini Sangat. This Gurudwara is also associated with the childhood of Guru Ji. This place is just few meters away from Takhat Patna Sahib. Guru ji were playing with other children during his childhood.

Once Wife of King Fateh Chand Maini prayed to God to have a son like Guru ji. One day she was worshiping to God when Guru ji came and sat in her lap. Guru ji called her mother. She was amazed to hear this as nobody had called her with that name before. She was overjoyed as Guru Ji called her mother and She was called Dharm (religion) Mata. She served Guru Ji and his friends with the boiled grams.

Boiled grams are distributed as a Parsaad in this Gurudwara in the memory of Guru Ji.

In this Gurudwara following things are of the main concern:-

A pair of Kheen Khaab which Guru Ji wore in his childhood.

Raja Fateh Chand Maini a local chieftain and his queen were one of the great admirers of Gobind Rai. Though they had everything of worldly satisfaction yet being childless, felt a great gap in their life and darkness in future. This made them unhappy and disappointed. As per prevalent Hindu tradition a son did not inherit their property, but performed all the religious rites after their death to ensure their passage across the phenomenal world. King Fateh Chand and his queen one day narrated the sad incident of their life to Pandit Shiv Dutt because this Pandit was very popular among the Hindu society due to his pious life. He intimated that the heavenly child Gobind Rai could change their sad and pessimistic life into hope and immortality. Now both the king and the queen had a new object of their life and more admiration for the child prophet. Love and yearning grew day by day. One day queen was in her meditation room worshipping God. Gobind Rai along with his playmates entered the place, sat in the lap of the queen and said in lovely voice 'mother', due to full day's play we are tired and hungry, give something to eat. The sweet melody word 'mother', thrilled the childless queen.

Before this queen was never called by anyone, 'mother'. This pronouncement filled the long-outstanding gap in her heart. She embraced Gobind Rai in her arms. Both the King and the Queen were overwhelmed with joy and gratitude.

Boiled grams and purris already prepared for their own purpose were served to Gobind Rai and his companions. The same tradition till now is preserved and boiled grams are served to every visitor and pilgrim, in sweet memory of the visit of Gobind Rai. This visit changed the life of the King and the Queen, into happiness. They adopted Gobind Rai as their own son and decided to donate the palace and property in the name of Gobind Rai. The palace was converted into congregational center. Later on a beautiful Sikh Shrine was constructed. While returning home, Gobind Rai reported to his mother that he had made another mother. Mother (Gujri) asked, "Then how will one son play in two laps". "Just as one moon is visible in two pools at the same time" replied Gobind Rai.

The following historical things are worth seeing: 1. A pair of little shoes of Gobind Rai.

2. A little tree of Karonda, remains ever blooming that had grown up from the toothbrush of Gobind Rai.