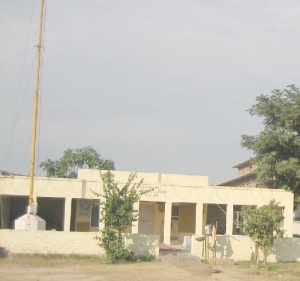 Preparation of attack on Sirhind

Singhs who were getting together at Kiratpur Sahib. The news of their getting together & their plan to move towards Sirhind, made Wazir Khan have sleepless nights. He made his best efforts not to let both the Singh teams meet. Sher Muhammed Khan of Malerkotla was sent to stop the Singhs from Kiratpur Sahib to move forward. Nawab had his brother Khijaar Khan, 2 nephews & Wali Muhammed along with him. Apart from the Malerkotias, he had Rangadhs from Ropar & some troops from Sirhind along with him. On the other side, the Sikh count was very less in comparison. They didn't even had guns for all. Both the armies had a battle near Ropar. The battle went on for whole day. The Singhs fought very bravely but by the evening it felt as if Sher Muhammed Khan would win. At night, one more team of Singhs came. The next morning, Shah Khijjar Khan attacked. He kept on moving forward. Both the armies came so near that they started to fight hand in hand. Singhs made good use of swords. Khijjar Khan asked the Singhs to throw their weapons away but at that point only, a bullet struck his chest which laid him sleep to death forever. On seeing Khijjar fall, the Pathans started running. Sher Muhammed Khan himself came ahead along with his nephews who wanted to pick up the dead body of their father but the Singhs made their way to heaven too. Sher Muhammed Khan also got injured. The Mughal army ran away instantly. This way the battle was in Singhs hands. The Singhs thought not to waste any time & started to move towards the north in order to meet Baba Banda Singh's team. On the other hand, Baba Banda Singh Bahadur was coming towards them. At that time, BABA JI had won over Banur. Here only he got the news of the Kiratpur Singhs win. He started to move forward to welcome them. On the road leading from Ambala to Ropar, in the midway of Kharar & Banur, both the teams of the Singhs met. The Singhs celebrated a lot. Krah Parshaad was served in abundance. Now Singhs started moving towards Guru Maari Sirhind. The horrible incidence of younger Sahibzada's martyrdom once again came in front of them. Their hearts were filled with a feeling of revenge. Wajir Khan got terrified on seeing the prperation of the Singhs. He got a inner feeling that even the Royal army would not be able to save Sirhind. He sent 1000 men along with the wicked Sucha Nand's nephew & asked him to join the Singhs & if possible he should kill Baba Banda Singh Bahadur. When the battle starts, he should join back to the Royal army. This way the Sikhs would be disappointed. 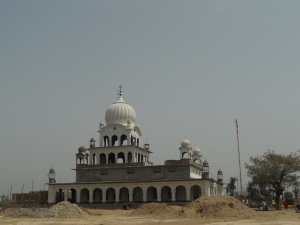 Wajir Khan made all endeavours to prepare for the battle. He called all his friends & Kings he knew. They raised slogans of Jehad following which the armies going far & near & crowds of Gazis gathered near Wajir Khan. He collected huge amount of lead & gun powder. Cannons & Elephants were also brought. Like this, with a army of approximately 20,000 & some Gazis, Wajir Khan started to move in order to stop the Singhs. On the other hand, Singh count was less in comparison. They also didn't had any cannons or weapons with them. The horses were also less. But they had inevitable faith in Waheguru. The Martyrdom of the young Sahibjada's was creating a desire in them for a religious battle. Baba Banda Singh Bahadur ordered Sardar Baaj Singh , Sardar Fateh Singh etc. to catch hold of Wajir Khan whichever way possible & the Muslims who give in & the Hindus who captulate, they should be spared rest whoever shows antipathy should be offered to sword.

On 12th May 1710, both the armies battled on the grounds of Chappar Chirhi. On 13 Jeth 1767 Bikrami, the military command of the Singhs was in the custody of Bhai Fateh Singh, Baaj Singh, Dharam Singh, Aali Singh & Shaam Singh. In order to keep an eye on the army's movement & to order them, Banda Singh sat on a hillock. There was a powerful attack from both sides. The crackling sound from the cannons made the skies shiver. The bandits & robberers who had joined the Singhs with a motive of robbery, ran away once the battle started. Sucha Nand's nephew, along with his 1000 companions, left the association of the Singhs. It felt as if the Muslims would be a strong side. BABA JI himself took the custody of the military command. He tamed the fugitives & attacked the elephants. The elephants ran backwards along with the Mughal Leaders. In this stampede, Sher Muhammed Khan & Khwaja Ali Malerkotia died. Wajir Khan challenged Baaj Singh. Baaj Singh bounced towards Wajir Khan, snached his spear & hit it on his horse's head. On the other hand Bhai Fateh Singh hit Wajir Khan's armour with such bravery & force that the sword went piercing from his shoulders to his waist & Wajir Khan died as a result of his Sins. Following his death, the Mughal army ran away. On 17th May 1710 the victorious Singhs captured Sirhind. 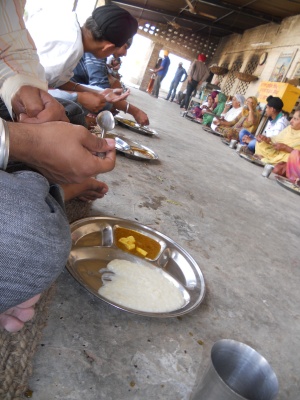