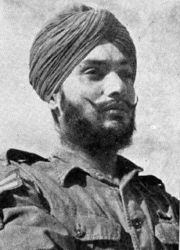 Gian Singh (5 October 1920 - 6 October 1996) was an Indian recipient of the Victoria Cross, the highest and most prestigious award for gallantry in the face of the enemy that can be awarded to British and Commonwealth forces.

He was 24 years old, and a Naik in the 15th Punjab Regiment, Indian Army during the Second World War when the following deed took place for which he was awarded the VC.

On 2 March 1945 on the road between Kamye and Myingyan, Burma (now Myanmar), where the Japanese were strongly positioned, Naik Gian Singh who was in charge of the leading section of his platoon, went on alone firing his tommy gun, and rushed the enemy foxholes. In spite of being wounded in the arm he went on, hurling grenades. He attacked and killed the crew of a cleverly concealed anti-tank gun, and then led his men down a lane clearing all enemy positions. He went on leading his section until the action had been satisfactorily completed.