Difference between revisions of "Ganjnama"

GANJ NAMAH (Treasure Book), by Bhai Nand Lal Goya, is a panegyric in Persian, partly verse and partly prose, in honour of the Ten Gurus. Bhai Nand Lal was a revered Sikh of the time of Guru Gobind Singh and a distinguished poet. The Ganj Namah renders homage to the Gurus whom the poet recalls in terms of deep personal devotion and veneration. The opening eleven couplets are an invocation to the Guru who raises men to the level of gods (3), to whom all gods and goddesses are slaves (4), and without whom there is only darkness in the world (5). This is followed by ten sections, each devoted to one of the ten Gurus of the Sikhs. Each section has two subsections a paragraph or two in prose followed by a series of couplets. The number of couplets in different sections varies from four on Guru Amar Das to fiftysix on Guru Gobind Singh. Each section has at its head the formula, vahiguru jio sat / vahiguru ji hazar nazar hai (God is true and He is omnipresent). The book contains no biographical details and celebrates only the spiritual eminence of the Gurus. The poet calls Guru Nanak the supreme dervish whom all gods and goddesses praise. Guru Nanak was sent by God Himself into this world so as to show mankind the way to Him. All his successors were one with him in spirit embodying the same message. The book concludes with the poet's humble supplication to Guru Gobind Singh that his life may be dedicated to the Guru that he may forever remain attached to his feet. 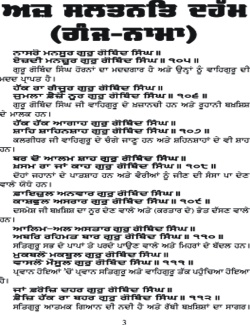 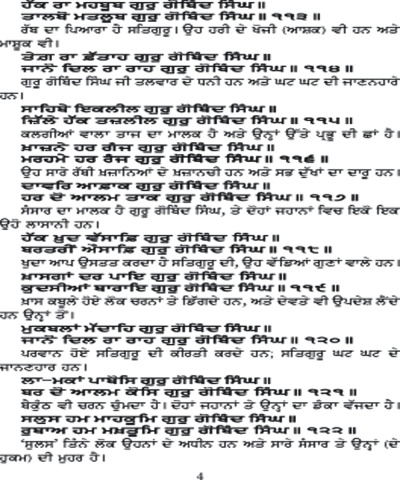