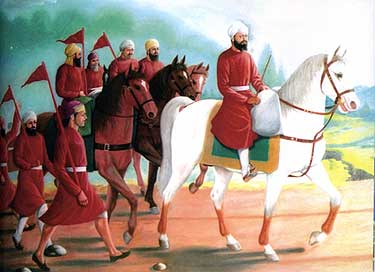 Sri Lehna was a pious man who lived at Khadur in the district of Amritsar(Tarn Taran Today). He was a shopkeeper. He was a good and honest man. He was very rich. He used to worship the goddess Durga. Many other people of his village did the same. He was their leader. Every year a large group of them used to visit the temple of that goddess. The temple is called Jawalamukhi. It is in the Himalayas. Sri Lehna used to go with these worshippers of Durga as their leader. On his hands and feet he wore bells. He used to dance before the goddess. The bells would tinkle when he danced.

He went on doing this till he grew to be an old man. In his village there lived a Sikh who was a follower of Guru Nanak. His name was Bhai Jodha. He was not a worshipper of Durga. No Sikh worships any of the Hindu gods or goddesses. Sikhs are worshippers of one God, commonly called "Waheguru". Bhai Jodha did not visit Durga’s temple. On the other hand, he used to think of God. He used to recite or read aloud the holy songs or hymns of Guru Nanak. One day, Sri Lehna heard him singing one of those sweet, sacred songs. He liked the song very much. He requested Bhai Jodha to teach him the song. Bhai Jodha did so with pleasure. He also told him of Guru Nanak. The Guru was an old man by that time. He lived at Kartarpur. That town is now in Pakistan.

Sri Lehna made up his mind to see the Guru. A short time after that he and his fellow-villagers started on their annual visit to Jawalamukhi. They halted for the night near Kartarpur. While his companions took rest, Sri Lehna started towards the town. He was on horseback. He was eager to see Guru Nanak.

On the way, he met a tall, strong and cheerful looking old man. ‘O Baba Ji' (O Old Man) said Sri Lehna to him, ‘kindly tell me the way to Guru Nanak’s place.’

‘Follow me, dear brother,’ replied the old man. ‘I am going that way myself.’

The old man led the way on foot. Sri Lehna followed him on horse-back. Soon, they reached the town.

The old man pointed towards a gate and said, ‘Enter there. That is the place, dear Friend.’ 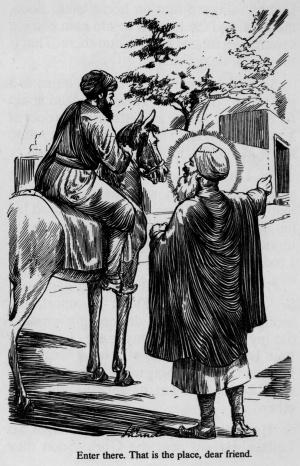 Sri Lehna went in. He tied his horse to a peg in the compound. Then he looked about for the Guru. A man guided him to the door of a room and said, ‘The Guru is in that room. He is alone. Go in and see him, brother.’

Sri Lehna entered the room. He was greatly surprised at what he saw. The old man sitting there was the same who had led his horse to this place. Sri Lehna felt very upset.

He said to himself, ‘I did a wrong thing. I rode while the Guru walked before me.’

Guru Nanak guessed what was passing in Sri Lehna’s mind. ‘Don’t be upset, my brother,’ he said. ‘You did nothing wrong. I did my duty. You are my guest. I am your host. It is the duty of a host to serve his guests. I did that. I did nothing more. Come, sit near me. Let us talk. Let us get to know each other.’

‘How kind and sweet he is!’ thought Sri Lehna. He sat near the Guru. Soon they were talking like old, intimate friends. Sri Lehna learnt many new and good things from the Guru. His heart was filled with deep love and respect for him. He decided to give up worshipping Durga. He would worship God instead of the goddess. He became a Sikh (follower) of the Guru. He threw away the bells from his hands and feet.

In the morning he met his companions. He said to them, ‘I do not wish to go to Jawalamukhi. I shall not worship any goddess any more. I have decided to worship God in Guru Nanak’s company.’ His companions went away. He remained with the Guru. He became the Guru ji's sikh and came to be known as Bhai Lehna Ji.