Dharma is the son of compassion 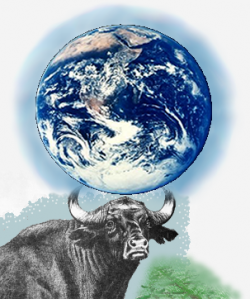 "Dharma is the son of compassion" is a central belief of the Sikhs. The Guru Granth Sahib is the primary spiritual guide for the Sikh and provides instructions to the ardent learner for this difficult and problem-laden journey of life. In the Guru Granth Sahib, the "holy book" of Sikhism, the first and central sacred text (bani) is called Japji sahib. This text is recited daily by many thousands of Sikhs worldwide. On page 3 of the Sikh holy scripture (the 11th and final) Sikh Guru is found the following Shabad or sacred verse:

The sanctity of this world is held in place by dharam (path of righteousness) which in turn is a product of compassion or daya. Without compassion, this world would turn into hell and righteousness could not be found. The Sikhs consider the Guru a divine spirit which can guide and provide instructions on how to become a better person and a useful member of a saintly society. The Guru can completely transform an ordinary individual and provide a person with a new lease on life. This verse provides a simple but important guide to the Sikh and for all other believers in the Supreme Spirit to re-adjust their mind to follow the path of compassion in their daily lives.

Only by practising compassion can the path of righteousness be found and only then can there be order in the world. Without compassion there will be no order and the people of the world will suffer in pain. "How can anyone know the pain of another, if there is no compassion and sympathy within? ॥1॥Pause॥" (SGGS 793). Only by having compassion for others will one be able to perceive the pain felt by others and thus stop inflicting this pain and take steps to change ones own behaviour so that it becomes more caring and merciful.

In Gurmukhi, Daya translates to compassion or mercy and is a most important quality for a Sikh. It is a necessary quality needed to become compliant to the teaching of the Guru Granth. Mercy and compassion must become an integral part of a Sikh's mind set. The devotee of the Sikh Gurus must keep compassion at the forefront of his or her mind and this virtue must accompany the Sikh at all times.

Daya is a divine quality and a moral virtue highly prized in most religious traditions. In the Sikh Scripture, mahadaial (super compassionate), daiapati (lord of compassion), daial dev (merciful god), karima, rahima (the merciful one), etc., have been used as attributive names of God (GG, 249, 991, 1027, 727). In Sikh ethics, too, daya is inter alias, a basic moral requirement, a moral vow. “Keep your heart content and cherish compassion for all beings; this way alone can your holy vow be fulfilled” (GG 299).

The Sikh philosophy give prominence to five qualities or virtues that are deemed essential to a Sikh. It is regarded as a duty of the Sikh to meditate and recite the Gurbani daily so that these five primary virtues become a part of the Sikhs personality. One being Compassion Daya; the other four qualities given prominence by the Sikh Gurus and part of this "arsenal of virtues" are: Truth (Sat), Contentment (Santokh), Humility (Nimrata) and Love (Pyare).

The importance of Daya can be seen from the following Shabads from SGGS:

For the Sikhs, the word "Dharma" means the "path of righteousness". What is the "righteous path"? That is the question that the Sikh scriptures attempt to answer. The Sikhs treat the Guru Granth Sahib as a living Guru. The holy text spans 1430 pages and contains the actual words spoken by the Sikh Gurus and various other Saints from other religions including Hinduism and Islam. Sikh Dharma is righteous way of life as revealed through the teachings of ten Gurus who are accept by the followers as if they were spiritually the same.

The Gurus are considered "the divine light" and they conveyed Gurbani (the word of God) in the form of the Guru Granth Sahib to the world. In this faith, God is described as both Nirgun (transcendent) and Sargun (immanent). Further, God pervades in His creation and is omnipresent, but cannot be incarnate. The principal Sikh belief lays stress on one's actions and deeds rather than people's religious labels, rituals or outward appearance or signs.

“The earth exists for Dharma to be practised” is another important concept found in the Sikh holy verses. The word dharma has been employed in the sense of duty. Duty is usually performed either out of a sense of social responsibility or through moral awareness. Guru Nanak links this sense of duty to man’s consciousness of divine justice. This is the stage in which a sense of inquisitiveness is aroused in the mind of the devotee who is now no longer a casual onlooker of the world around but can perceive the divine purpose behind the creation of this planet of ours, the earth, which is set in the cosmic cradle of time and space and is sustained by the vital elements. Man has been placed in this world to respond to the Creator’s purpose.

The Guru further explains that many times this spiritual journey is impeded by one's own judgemental attitude towards others born of one's own self-conceit that "I know best and my way is best". The Guru makes it clear in this stanza 33 of Japji Sahib, that God alone elects and honours the righteous and stands as judge in His court. There is no other judge at all. Sikhi teaches that we should not judge others, but leave that to Waheguru (God). We are here on Earth to perform righteous duty as compassionately as possible and to the best of our ability.

The shabad uses the prevalent definition of Mythological Bull supporting earth to give the analogy of Dharm and Compassion. So that clarity prevails, that the concept of Bull has been taken to present a new thought.