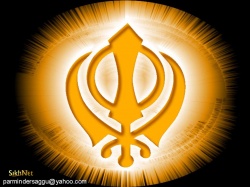 A sacred book of writings attributed to Guru Gobind Singh, the tenth Guru of the Sikhs.

The Dasam Granth contains 1428 pages and is the believed by some Sikhs to be collection of the writings of the 10th Patshah, Sri Guru Gobind Singh Ji. The reason why some do not believe it is all the works of Guru Gobind Singh Ji is because his name is not written in the hymns, as the names of authors are found in the hymns of Guru Granth Sahib, and the common style of Punjabi poets. Some Sikhs believe that Guru Gobind Singh works may be present in some parts of Dasam Granth. It contains his Jaap Sahib, the Akal Ustat or praise of the Creator, the Vachitar Natak or Wonderful Drama, in which the Guru gives an account of his parentage, his divine mission, and the battles in which he had been engaged. There is much Hindu Pandit philosophy throughout the Dasam Granth that very few people understand.

Then follow the Gyan Parbodh, or awakening of knowledge; Chobis Avatar - accounts of twenty-four incarnations of the Vishnu, according to the Hindus, and Brahrnavatar and Rudravtdr, selected because of their warlike character; the Shabad Hazare; quatrains called Sawaiyas, which are religious hymns in praise of God and reprobation of idolatry and hypocrisy; the Khalsa Mahima, or words in praise of the Khalsa; the Shastar Nam Mala, a list of offensive and defensive weapons used in the Guru's time, with special reference to the attributes of the Creator; the Tria Charitar, or tales illustrating the qualities, but principally the deceit of women; the Zafarnama, containing the tenth Guru's epistle to the emporor Aurangzeb; and Hikayats, several metrical tales in the Persian language.

The Dasam Granth was compiled by Bhai Mani Singh Ji, a companion and disciple of the Guru, after the tenth Guru's death. Bhai Mani Singh spent nine years at this task, by getting copies from other disciples and filling in some of the gaps by memory.

There are many compilations in existence and many are still being discovered. There are three 'main' well known editions: One edition said to have been written by Bhai Mani Singh in his own hand (in the possesion of Gulab Singh Sethi of New Delhi); and the volumes at the Gurdwaras at Patna and Sangrur. The current 'authorised' version in circulation, closely follows the edition ascribed to Bhai Mani Singh.

The Contents of the Dasam Granth are:

The language of most of the Dasam Granth is largely Braj veering towards Sanskrit at one extreme and simple colloquial Hindi at the other. The Zafarnama and the Hikayats are in Persian and several passages in other works are in Punjabi. The 'author(s)' not only used this melange of languages but also coined words half Arabic half Sanskrit (and sometimes words without any meaning just to create a musical effect). Some of this kind of writing has great power and beauty.

The descriptions of scenes of battle are couched in extremely vigorous staccato rhyme often reduced to lines of one word each. The battles waged by Chandi and the Guru's encounters with the hill chiefs at Bhangani and Nadaun are among the most stirring that exist.

The scenes of nature and love, particularly in the Krishna Avatar, are haunting in their loveliness:

"Beside the sparkling waters of the river,

On the bank in silver moonlight bathed

Were strewn jasmine pearls as if to make a bed

And blossoms twined overhead to make a bower.

Krishna took Radha by the hand,

tilted up her face

And gazed upon her beauty. Then clasped

The damsel fair in his dark arms

As a black shade eclipses the moon.

Spoke Krishna: "Maiden fair, I sent not for thee.

I am as a deer wounded by the hunter's dart.

Thy love-lorn eyes have pierced my heart.

Beloved mine! Thy wrath's burning fire

Hath singed my limbs but I wished not to depart.

I came not at thy command, but to soothe

My burns before the warmth of they love."

The writings within the Dasam Granth have not been fully accepted by all Sikhs, for they do not fit into, or appear not to, a rigid interpretation of Sikh religion (In particular the Tria Charitar and Hikayats Sections).

At one stage it was decided to divide the book. Bhai Mehtab Singh of Mirankot (who was charged by the Panth to capture or assassinate Massa Ranghar who had then planted himself in the holy Golden Temple at Amritsar and was desecrating its sanctity) suggested to the leaders of his community that if he came back victorious in his mission, the book should be preserved in one volume, otherwise it may divided into two. Mehtab Singh was successful in putting Massa Ranghar to an ignoble death and hence the volume was preserved as it now is. This, however, as the Sikh savant, Bhai Kahan Singh points out, is a most arbitrary way of settling a point of such literary and theological significance. Moreover, a single man's point of view should not have prevailed - especially of a military hero, or even a Jathedar in search of martyrdom, in preference to the viewpoint of the theologians and scholars who were still discussing the point.

From 1892 to 1897, eminent scholars assembled at Akal Takht, Amritsar, to study the various printed Dasam Granths and prepare the authoritative version. They consulted as many as 32 editions before preparing the version that is currently in circulation. Among these scholars were Bhai Manna Singh Hakim, Bhai Narain Singh, Bhai Thakur Singh, Bhai Sant Singh (son of Giani Gian Singh), Bhai Bishan Singh, Sant Gopal Das Udasi and Mahant Amir Singh. In this process, they determined that the Dasam Granth is entirely the work of Guru Gobind Singh.

Further reexaminations and reviews took place in 1931, under the ageis of The Darbar Sahib Committee of the Shiromani Gurdwara Prabandhak Committee. It vindicated the earlier conclusions and published its findings in a book.

However, the controversy continues as there is reluctance to fully accept the entire text of the Dasam Granth. Therefore, scholars appealed to Baba Virsa Singh, a highly revered spiritual teacher of Sikh background, to gather scholars to clarify the doubts about Dasam Granth. A seminar was held on January 3rd and 4th, 1999, at the Gobind Sadan Institute in New Delhi, India.

There exists a letter from Bhai Mani Singh to Mata Sundari Ji which suggest that the Banis of the Dasam Granth are indeed genuine Banis of Guru Gobind Singh. The English translation is as follows:

May the Almighty help us.

Mani Singh makes his humble prostration at the holy feet of his venerable mother. Further news is that the climate of this place has aggravated my rheumatism and my health deteriorates fast. I will have to listen to the healing parable of the tertian fever. But my illness has caused no slackness in the performance of the holy service of the Hari Mandir (Golden Temple). The Khalsa no more hods away over the country and its power has waned. The Sikhs have migrated to the mountain retreats. The Malechhas reign supreme in the country. There is no security for the (Sikh) children and women in any habitation. They are hunted out and killed. The opposing states have also joined hands with them. The Hindalis spy on the Sikhs. All (the Sikhs) have deserted the Chak (The earliest name of Amritsar). The Mutsaddis (priests) have also fled. So far the Immortal Lord protects me. Tomorrow is uncertain. What is ordained by the Lord shall prevail. The adopted son of Binod Singh has passed away. Among the books I sent per Jhanda Singh, there is one entitled "303 Chritra Upakhyans" by the Lord (Guru Gobind Singh). Give that to Sihan Singh in the Mahal (Matia Mahal in the interior of Delhi City). So far there is no trace of the book "Nam Mala". I found the first part of "Krishna Avtar" but not the second. I shall send it when available. There is a rumour in the country that Banda (Bahadur) has made his good escape from the Emperor's jail. May the Guru protect him. The Guru's family (the descendants of the Guru) at Khandur have sent five tolas of gold as a gift for your son's bride(an adopted son of Mata Ji, as all of her four sons were martyred already). Recover seventeen rupees from Jhanda Singh ; I gave him five rupees to meet the expenses of the journey…(?) These expenses will be incurred by him. The Mutsaddis have not yet settled accounts, otherwise I would have sent a draft from the city (presumably Lahore) . If my health improves I shall come in the month of Kartik.

P.S. Reply in bamboo stick. (as being confidential)

Many scholars refer to the line, "Among the books I sent per Jhanda Singh, there is one entitled '303 Chritra Upakhyans' by the Lord (Guru Gobind Singh)" as the strongest evidence that the Dasam Granth is entirely the work of Guru Gobind Singh. Khushwant Singh suggests that this is a mistake in translation:

"Both Dr.Ashta and Dr.Trilochan Singh have translated Sahib de 303 Chritra Upakhyans as "written" by the Master, which the original does not warrant. The word "de" does not necessarily mean "written by"; it can mean "of" or "belonging to" and probably referred to a volumne which belonged to the Guru. Besides, in the Tria Chritra Upakhyans as it exists in the Dasam Granth today, the number of tales is not 303 but 404. What Mani Singh had sent with the letter was certainly not the tales that are incorporated in the Dasam Granth of today."

The Dasam Granth ascribed to Bhai Mani Singh, states that over 125,000 verses were composed in the court of Guru Gobind Singh, in particular, on page 615 of the manuscript, it states:

(A lac and a quarter verses

existed before and not one

less that that number)

Khushwant Singh on account of this suggests that the Granth in question forms only one-tenth of the total and that the word Dasam in fact refers to the one-tenth quantity and not to the tenth Guru.