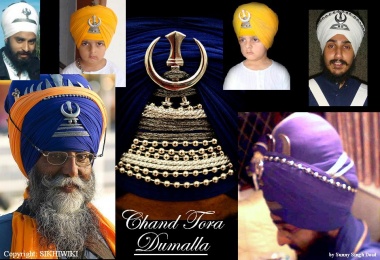 The Chand Tora Dumalla is the style of turban generally worn by Nihang Sikhs. This is a warrior style turban meant for going into battle.

The "Chand Tora" is a metal symbol consisting of a crescent and a double edged sword, it is held in place at the front of the turban by a woven chainmail cord tied in a pattern within the turban to protect the head from slashing weapons.

Hindu Minded Meanings
Lot of people confuse Chand with Shiva's Moon. Sanatanis (Hindu-minded ) say that the Chand represent the Shiva Lingam (Shivling), where one worships the bits on the bottom of the chand, which represent Shiva's powers of regeneration, Shakti or strength. This story is, however contradictory to Gurbani, where although many Hindu Gods may be mentioned, they are not worshiped, as there is only one Akaal, (Waheguru or God) hailed as the most powerful and only supreme being. The Chand is also a symbol of Shiva who is always depicted with a crescent moon in his hair. Shiva is considered a very powerful mythological figure.

The purpose of the "Tora" is to keep the dastaar together. It goes over the bunga to protect it and protect the dasam dwar. Also used for keeping shastars together.

In the past only Nihangs wore this type of Dumalla, but for a few years now some young Sikhs in the west, most often from a non-Nihang background, occasionaly wear Chand Tora Dumallas.