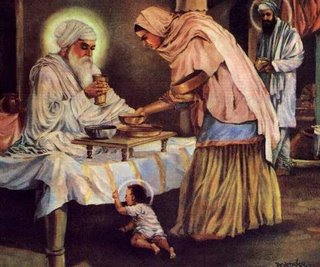 Noticing that the waters of the pond were said to have 'curative' powers, Bhai Jetha expanded the pond into a Sarovar that he named Amritsar. It was in the center of this 'Lake of Amrit that the construction of the Harmandar Sahib was begun. Today the city that took its name from a sarovar, is known around the world as Amritsar.

There is a superstition in Punjabi culture that a father does not get any service done from a daughter, but Bibi Bhani used to serve her father before marriage and kept serving him even after her marriage. We can learn a lesson from her way of serving that one can continue doing worldly duties along with daily religious service or worship.

She never allowed omestic circumstances to become obstacles as she to serve her father humbly and with devotion, even after she became the mother of three sons. She very gladly and regularly kept giving bath to her father and used to keep a watch so that no body disturbed him during his meditation.

So much so that when a leg of that bath-stool was broken, she kept her hand underneath it, so that his meditation was not disturbed. Only Bibi Bhani could do that.