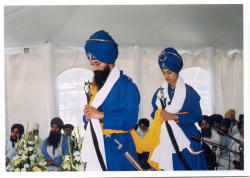 The "bana" or form, the personal appearance of a Khalsa, is one of the foremost ways that a Khalsa maintains his or her consciousness as the Guru Gobind Singh intended. The Guru has given his Sikh specific instructions to keep his or her natural form as created by God. Thus, all hair is maintained, uncut, and untrimmed. The Guru has given his Sikh a standard of dress which distinguishes him or her as a human being dedicated to a life of truthful living. The Guru has instructed his Sikhs to maintain high moral character, symbolized by the wearing of the steel bracelet, ("kara") and to stand prepared to defend righteousness, wearing the "kirpan" or sword.

Is Bana required for a Sikh

For a Sikh, Bana is not required but for Khalsa, Bana is required. Kabir ji was a Sikh, so was Bhagat Pipa and others. All have different bana but all got prestigious place in Guru Granth Sahib.

Kabirpanthis are Sikhs of Bhagat Kabir, Ramanand have their own sikhs But Khalsa is Sikh of Guru Gobind Singh.

Sikh is wide term and should not confuse with Khalsa. A Sikh can bear any kind of pain, but Khalsa stands against the tyranny.

When Guru Gobind Singh called for a head, then the person who baptized were called Khalsa, it doesn't mean others were rejected. They were still Sikhs. Khalsa was made to stand against evil, who could not bear any ones pain.

Only Hairs are required for Sikhs and still required due to some reasons. Gurbani says "Sabat Soorat Dastar Sira". But Gurbani doesn't contain anything about Khalsa Baptism. It was Khalsa Baptism which was made using this bani, for Sikh.

Todar Mal was a Sikh of Guru and So was Dilawar Khan.

It would be better if today Sikhs guide the theology of religion so a person himself comes into Khalsa Fold with his own mind. If you are keeping hairs of your kid without telling him what actually a Khalsa is what actually a Sikh is then you are doing a blunder for religion. First Bani then Bana.

The long hair of a Sikh is tied up in a Rishi knot (Joora) over the solar center (top of the head), and is covered with a turban, usually five meters of cotton cloth. (The man’s solar center is nearer the front of the head. The woman's solar center is further back.) A female Sikh may also wear a chuni (chiffon scarf) draped over it. All Sikhs cover their head while in Gurdwara. With the growing awareness of the non-sexist nature of Sikh Dharma and the Sikh lifestyle, many Sikh women wear turbans on a consistent basis, as the men do. The turban of a Sikh is his or her primary identifying feature. It is a statement of belonging to the Guru, and it is a statement of the inner commitment of the one who wears it. The uncut hair and the turban are a declaration to live in accordance with, and if necessary die in support of, the Teachings of the Sikh Gurus and the Siri Guru Granth Sahib. Regardless of the circumstances or the type of employment or activity, a Sikh keeps his or her form and identity as a Sikh. Clothes are modest, and exemplary of the identity and character of a soldier-saint.

Bana is the clothing that identifies us. All military personnel, from field officers to the highest command wear bana. It is a ‘unified form’. The Bana given to us by Guru Gobind Singh identifies us in our spiritual and temporal form as unified beings – divinely unique and gracefully powerful.