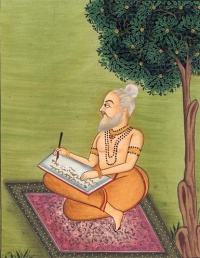 Balmikis revere both the Ramayana and Adi Granth, celebrating both Gurpurbs and Hindu festivals, especially the birthday (in October) of Valmiki. In Britain there are temples in Coventry, Bedford, Southall, and Brimingham. Balmiki leaders in Britain have their preferred spelling of 'Valmiki'.

BALMIKA (VALMIKI) Balmika, The sage Valmiki was the author of Ramayana. His place of residence was Chitra-kuta, a hill in the district of Banda in Bundelkund. When Sita was about to become a mother, she was left near the hermitage of Valmiki by Lakshmana. The sage kept her under the charge of his wife and female servants. Sita's two sons, Lav and Kusha, were then born in the hermitage of the saint. The young ones were brought up and given all the required education with the greatest care. The sage is said to have taught his poem to them. Thus the sage himself is one of the characters of Ramayana.

Valmikis is the name given to those devotees that follow the teachings of Bhagwan Valmik as portrayed in the Yoga-Vasistha and the Ramayana, both works written by the Maharishi Valmiki.

Today this sect exists mostly in the countries of India and Pakistan. However in the latter it is having a hard time because temples are being bulldozed by the government.

Like the Ravidasi (followers of Guru Raidas) and the Kabir Panthis (followers of Kabir), the Balmikis believe that Sage Valmiki was the avatar of God, and they uphold his work, the Ramayana as their holy scripture.

This article with thanks to Wikipedia.