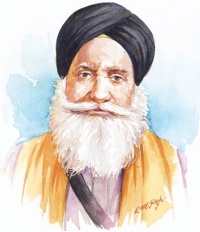 Baba Kharak Singh was born in 1868 at Sialkot, now in Pakistan. He was a Sikh political leader and virtually the first president of the Shiromani Gurdwara Parbandhak Committee. Baba ji was from the first batch of graduates of the Punjab University, Lahore. His father, Rai Bahadur Sardar Hari Singh, was a wealthy contractor and industrialist.

Kharak Singh, having passed his matriculation examination from Mission High School and intermediate from Murray College, both at Sialkot, joined Government College, Lahore, and was among the first batch of students who graduated from the Punjab University in 1889.

He then joined Law College, Allahabad, but could not complete his course owing to the death of his father and elder brother in quick succession. He returned to Sialkot to manage the family property. He started his public life in 1912 as chairman of the reception committee of the 5th session of the Sikh Educational Conference held at Sialkot.

Three years later in 1915, as president of the 8th session of the Conference held at Tarn Taran, he surprised everyone by walking to the site of the conference breaking the custom of being carried in state on a buggy driven by six horses. He also refused permission for a resolution to be moved at the conference wishing victory to the British in World War I.

It was the Jallianvala Bagh massacre of 1919 which brought Kharak Singh actively into Sikh politics.

He presided over the historic session of the Central Sikh League held in Lahore in 1920 where under his direction the Sikhs participate in the non-co-operation movement. Also this event Mahatma Gandhi, the Ali Brothers and Dr. Kitchlew were present and advised the Sikhs to throw in their lot with the Congress. In 1921 he helped found the S.G.P.C. and was unanimously elected its President. Afterwards, too, he held that exalted office on several occasions.

He successfully led in 1921-22 the first Morcha (agitation) against the British government in November, 1921, which is popularly known as the Keys morcha. This was an protest by the Sikhs for the restoration of the keys to the Golden Temple treasury (toshakhana) seized by the British Deputy Commissioner of Amritsar. He was among the first to be arrested and this was the first of his numerous jail terms under the British. His arrest led to a vigorous storm of protest against the Government.

He was jailed on 26 November 1921 for making an anti government speech, he was sentenced to six months' imprisonment on 2 December 1921, but was released on 17 January 1922 when the keys of the toshakhana were also surrendered to him. In the same year he was elected President of Punjab Provincial Congress Committee.

Baba ji was, however, rearrested soon and, on 4 April 1922, was awarded one year's jail for running a factory for manufacturing kirpans, one of the religious symbols of the Sikhs, and another three years on charges of making seditious speeches.

He was sent to jail in distant Dera Gazi Khan (now in Pakistan), where in protest against the forced removal of the turbans of Sikh and Gandhi caps of non-Sikh political prisoners, he discarded all his clothes except his kachahira or drawers. Despite the extreme weather conditions of the place, he remained bare-backed until he was released after his full term (twice extended for non-obedience of orders) on 4 June 1927.

Unity and speech in Lahore

He had unanimously been elected president in absence of the Gurdwara Central Board (later re-designated Shiromani Gurdwara Parbandhak Committee) constituted under the Sikh Gurdwaras Act, 1925, and was reselected to the high office after fresh elections in 1930. He resigned soon after, although he continued to work both for national independence and for the protection of Sikh interests.

In a lecture at Lahore he said "In the fight for India's freedom if you find a bullet in my back, do not count me as one amongst the Sikhs of the Gurus and do not cremate my dead body according to the Sikh rites. A disciple of the Great Gurus is an ideal saint-soldier and it supposed to fight in the vanguard and face the bullets in the chest and not in the back, and we the Sikhs shall never allow any foreigner to rule over Motherland, and we shall brook no injustice."

Demonstrations against the British

He organized a mammoth demonstration in 1928 when the Simon Commission visited Lahore. Also during 1928-29, he had vehemently opposed the Nehru Committee Report until the Congress Party shelved it and undertook to secure Sikhs' concurrence in the framing of constitutional proposals in the future. He was again sent to jail in 1931 but was released after six months. He was re-arrested in 1932 and detained for 19 months in prison.

He opposed, without success, the Communal Award, which gave statutory majority to Muslims in the Punjab, and was in and out of jail on several occasions for making what the government held to be seditious speeches. Once again he was taken in custody in 1935 for his scathing criticism of the Communal Award.

He was again sent to the jail in 1940 for participating in Satyagrah movement in 1940. In spite of his old age, Babaji did not stop his activities.

Recognition of his Unity stand

He was one of those leaders who unhesitatingly took up the cause of the I.N.A. in 1945. He was a firm protagonist of national unity and opposed both the Muslim League's demand for Pakistan and the Akali proposal for an Azad Punjab. During the elections of 1946 he toured the whole of the Punjab and the N.W.F.P. and made a magnificent contribution to the success of the Congress.

According to Jawahar Lal Nehru, during his whole life had never surrender to what he considered to be wrong or evil, whatever the consequences might have been. At another place Mr. Nehru said about him, "There are few hands which can uphold the honour and preserve the dignity of the national Flag better than those of Babaji".