Difference between revisions of "Art and Architecture of the Golden Temple" 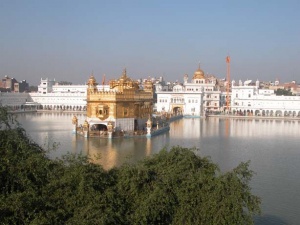 According to the official list of buildings of interest, published by the Punjab government in 1875, the design of the temple, as reconstructed by Ranjit Singh, was borrowed from the shrine of Saint Mian Mir, near Lahore. Louis Rousselet, writing in 1882, regarded it as a “handsome style of arthitecture”. Major Cole described it as an adaptation of Mohammadan styles, flavoured with a good deal of Hindu tradition.

Percy Brown considered it to be a product of the synthesis of Hindu and Muslim influences, combined with elaborations that imparted it an appearance of its own. In the opinion of Hermann Goetz, Kangra transformation of Oudh architecture was taken over by the Sikhs and evolved into that wonderful, though occasionally gaudy, Indian ‘rococo’ art often seen in the gurdwaras of Punjab.

Guru Arjan Dev, the Architect of the Golden Temple

The architectural prototype of the Golden Temple came into being as an idea combining the dharamshala and the tank envisaged by Guru Arjan, the son and successor of Guru Ram Das. Instead of building the temple on a high plinth in the Hindu style, Guru Arjan had it built in a depression so that worshippers had to go down the steps in order to enter it.

Also it had four entrances, symbolic of the new faith which made no distinction between the four Hindu castes. Although there is no written record or contemporary sketch giving the concept of the prototype, it appears to have been, more or less, similar to the present structure dating from 1764, with the greater part of its decoration added in the eary years of the nineteenth century.

The year 1764 has been ascribed by H.H. Cole in his monograph on the temple published in 1884. However, in Tawarikh Sri Amritsar, published in 1889, Giani Gian Singh states that the tank, the Hari Mandir, the causeway and Darshani Deorhi were completed in 1776.

The main structure rises from the centre of the sacred pool, 150 metres square, approached by a causeway about 60 metres long. An archway on the western side of the pool opens on to the causeway, bordered with balustrades of fretted marble, and, at close intervals, there are standard lamps, their great lanterns set upon marble columns. The 52-metre square-based Hari Mandir, to which the causeway leads, stands on a 20-metre square platform. Its lower parts are of white marble, but the upper parts are covered with plates of gilded copper.

In the interior, on the ground floor, is the Guru Granth Sahib, placed under a gorgeous canopy, studded with jewels. On the second storey is a pavilion known as Shish Mahal or Mirror Room, so designed as to have a square opening in the centre to view from there the ground floor, with the further provision of a narrow circumambulatory around the square opening.

The intricate work with mirrors

The interior of the Shish Mahal is ornamented with small pieces of mirror, of various sizes and shapes, skilfully inlaid in the ceiling, and walls richly embellished with designs, mostly floral in character.

Further above the Shish Mahal is again a small square pavilion, considerably small both at its base as well as in its elevation, surmounted by a low fluted golden dome, lined at its base with a number of smaller domes. The walls of the two lower storeys, forming parapets, terminate with several rounded pinnacles. There are four chhatris or kiosks at the corners. The combination of several dozens of large, medium and miniature domes of gilded copper create a unique and dazzling effect, enhanced by the reflection in the water below.

Maharaja Ranjit Singh repaired the principal building in 1802 A.D. This act is commemorated by an inscription over the entrance to the central shrine, which reads: The Great Guru in His wisdom looked upon Maharaja Ranjit Singh as his chief servitor and Sikh, and, in His benevolence, bestowed on him the privilege of serving the temple.

Work on the roof

To roof the temple with sheets of gilded copper, he donated Rs. 500,000 and the work was executed by Mistri Yar Mohammad Khan, under the supervision of Bhai Sand Singh. The first plate on the temple was fixed in 1803 A.D. The personages who donated for the embellishment of the ceiling on the ground floor included Tara Singh Gheba, Pratap Singh, Jodh Singh and Ganda Singh Peshawari, the last of whom made his contribution in 1823 A.D.

The archway under the Darshani Deorhi was embellished with sheets of gilded copper by Sangat Singh, the Raja of Jind. Being the central shrine of the Sikhs, almost every Sardar of any pretension contributed to its architectural and decorative additions from time to time. That is why it is not feasible, except for a few date-inscribed works, to make a chronological account of the decorations, murals or other work, in the Golden Temple.

The decorations which fall strictly in the category of mural paintings are flora patterns interspersed with animal motifs. There are about 300 different patterns on the walls, which, from a distance, look like hung Persian carpets. The naqqashes, or painters, of these patterns had developed a terminology of their own to distinguish various designs.

Among these the most prominent is known by the name of Dehin: a medium of expression of the imaginative study of the artist’s own creation of idealised forms. Gharwanjh is the base of Dehin. This is also a decorative device involving knotted grapples between animals.

In the Golden Temple are seen Gharwanj showing cobras, lions and elephants clutching one another, carrying flower vases in which fruits and fairies have been depicted. Patta is a decorative border design used around the Dehin and often depicted through creepers. There are also compositions based on aquatic creatures.

The only mural depicting human figures is to be seen on the wall behind the northern narrow stairway leading to the top of the shrine, representing Guru Gobind Singh on horseback. According to the late Bhai Gian Singh Naqqash, it was painted by a Kangra artist specially commissioned by Ranjit Singh for this purpose.

It is said to be a true copy of a miniature painting that originally was in the collection of Raja Sansar Chand of Kangra, which Ranjit Singh had intended to get copied in the form of a mural in the Golden Temple. Since the artist of the miniature in question had already died, the mural was executed by the painter’s grandson. The name of the painter, however, is not known.

In addition to the work that falls strictly under the category of mural painting, a great volume of similar work in allied arts, loosely coming in the range of mural art, has been done in the Golden Temple from time to time. This includes the work in embossed copper, gach, tukri, jaratkari and ivory inlay.

Most of the exterior upper portions of the walls of the Golden Temple are covered with beaten copper plates, heavily gilded. The raised decorations are mainly floral and abstract, but there are some panels representing the human figure. On the front side, for instance, are two embossed copper panels, the lower representing Guru Nanak flanked by Bala and Mardana, and the upper representing Guru Gobind Singh on horseback.

Work in stone and glass

Gach, a sort of stone, or gypsum, was treated to form a paste and was applied on the wall like lime. Then it was fashoined out in designs with steel cutters and other implements. Gach work inlaid with coloured glass was known as tukri work and is to be seen in the second storey of the Shish Mahal.

Jaratkari work involved the inlaying of coloured cut-stones in marble and is to be found on the lower portion of the exterior walls of the temple. In fact, the work is pietre dure and the inlay consists of semi-precious stones, such as lapis lazuli and onyx. The designs are Mughal in spirit, but the introduction of human figures, never shown in true Mughal decorations, reveals their Sikh origin.

The ivory inlay work is to be seen only on the doors of the Darshani Deorhi. The gate is made of shisham wood, the front overlaid with silver, the back inlaid with ivory. The silver-plated front is ornamented only with panels.

At the back are square and rectangular panels with geometrical and floral designs, in which are introduced birds, lions, tigers and deer. Some of the ivory inlay is coloured green and red, the effect being, in the words of H.H. Cole, “extremely harmonious.”

The painters and craftsmen

Most of the painters and craftsmen, who worked in various branches of mural arts and its appurtenances in the Golden Temple, remained unknown. Therefore, barring a very few works, it is almost impossible, in the present state of our knowledge, to attribute them to particular painters and craftsmen.

A good deal of the old work, particularly mural in character, has disappeared from the precincts of the Golden Temple. Initially, the disappearance of murals started at the close of the nineteenth century, when devotees were permitted to present contributions in the form of inlaid marble slabs, which were fixed on the walls of painted with frescoes.

The old Bungas of the Golden Temple, which have been demolished, were repositories of splendid paintings. Inside the main Darshani Deorhi, where marble slabs have been fixed, there were fine paintings by Mahant Ishar Singh.

Efforts have also been made to renovate the decaying paintings in the temple proper. But there appears not much reason to regret the loss, because, in the words of Michael Edwardes, the Golden Temple “is a symbol, glowing in richness and colour.

That richness has, over the years, been constanly renewed, not always perhaps in the best of taste. But the Hari Mandir is not a museum. On the contrary, it is a shrine, part of the essential machinery of a living faith.”

Earlier restoration work was being continuously carried out by traditional artists like Gian Singh Naqash who worked for 32 years since 1910 and later by Atma singh Naqash and many more. Namita Jaspal and her team of six women from firm Heritage Preservation Atelier Private Linmited started restoration work of 2500 sq. feet on walls and 4000 sq. feet of stairs since December 2013 ; as sub contractor of firm [http://www.dronah.org/Projects.aspx DRONAH of Gurgaon which was awarded restoration contract by SGPC.<ref> http://www.hindustantimes.com/chandigarh/young-preservers-of-the-ageless-golden-temple/story-Wu3WCGtQKhT6DQJv8ezktJ.html Cite error The opening <ref> tag is malformed or has a bad name; $2 Area which was blocked at upper story has been opened for public after studding walls with glass frames and installing specially illuminating these with LED lights, since 5th January , 2017 on 350th Parkash Utsav of Shri Guru Gobind singh by SGPC. An article based on HT report also appeared in sikhchic as per following link