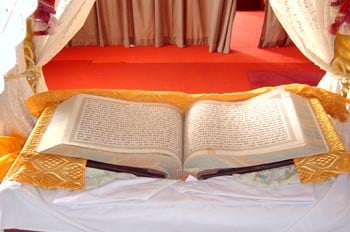 AKHAND PATH (akhand = uninterrupted, without break; path = reading) is the non-stop, continuous recital of the Guru Granth Sahib from beginning to end. Such a recital is normally completed within 48 hours. The entire Holy Volume, 1430 large pages, is read through in a continuous ceremony. This "ritual" is considered a very holy practise and is said to bring peace and solace to the participants and the passive listener of the recitation.

For it to be classified as a "Akhand paath", this reading must go on day and night, without a moment's intermission. The relay of reciters who take turns at reading the scripture must ensure that no break occurs in the reading. As they change places at given intervals, one picks the line from his predecessor's lips and continues. When and how the custom of reciting the canon in its entirety in one continuous service began is not known. Conjecture traces it to the turbulent days of the eighteenth century when persecution had scattered the Sikhs to far off places. In those exilic, uncertain times, the practice of accomplishing a reading of the Holy Book by a continuous recital is believed to have originated.

Important days on the Sikh calendar are marked by akhand paths in gurdwaras. Celebrations and ceremonies in Sikh families centre upon akhand paths. The homes are filled with holiness for those two days and nights as the Guru Granth Sahib, installed with ceremony in a room, especially cleaned out for the occasion, is being recited. Apart from lending the air sanctity, such readings make available to listeners the entire text. The listeners come as they wish and depart at their will. Thus they keep picking up snatches of the bani from different portions at different times. Without such ceremonial recitals, the Guru Granth Sahib, large in volume, would remain generally inaccessible to the laity except for barns which are recited by the Sikhs as part of their daily devotions.

In bereavement, families derive comfort from these paaths. Obsequies in fact conclude with a completed reading of the Guru Granth Sahib. At such paths, the Holy Book is generally recited or intoned, not merely read. This brings out tellingly the poetic quality of the ban and its power to move or grip the listener. But it must be listened to in silence, sitting on the floor in front of the Holy Book in a reverent posture. The start of the akhand path is preceded by a short service at which holy hymns may be recited, followed by an ardas offered for the successful conclusion of the path and distribution of karah prasad or Sikh sacrament. A similar service marks the conclusion. Ardas and karah-prasad are also offered as the reading reaches midway.

Many reasons for doing an Akhand paath

The recitation (or "Paath") is undertaken for various reasons. It can be in honor of a particular occasion; to mark a happy or sad occasion within the family; or simply to increase one’s feeling of connection to the Guru. Some of following may call for an Akhand Paath depending on the family's circumstances: a birth, a birthday, recovery from a medical operation, a wedding, a death, a graduation, on achieving a goal like GCSE exams, on passing the driving lesson, an anniversary, a historic occasion, etc.

Some Gurdwaras hold a weekly Akhand Paath and this gives the congregation (Sadh Sangat) a beautiful opportunity to establish a close relationship with the Guru, the community and provides the opportunity of carry out volunteer work (Sewa) thus obtaining the blessing of the Guru’s Word to the whole of the community.

It is said that when Guru Gobind Singh had completed the writing of the Guru Granth Sahib, he had five members of the congregation (Sadh Sangat) read it to him continuously. He stood and listened to the entire Guru Granth Sahib. People brought him water for his bath and for his meals where he stood. This was the first Akhand Paath. The second Akhand Paath was in Nanded after Guru Gobind Singh sent Banda Singh Bahadar to Punjab.

The Akhand Paathees (readers of the Paath) were Bhai Gurbaksh Singh, Baba Deep Singh, Bhai Dharam Singh (of Panj Piaray), Bhai Santokh Singh, and Bhai Hari Singh (who used to write the daily diary of Guru Gobind Singh). Before giving the Guruship to the Guru Granth Sahib (then called the Adi Granth) the Guru held this Akhand Paath and then proclaimed the Adi Granth as the perpetual Guru of the Sikhs.

Following this example, the Sikhs started the tradition of dedicating Akhand Paaths to various activities. Before battles, the Sikhs would arrange and listen to an Akhand Paath and then prepared for Battle. Akhand Paath was arranged before the Sikhs set out to rescue 18,000 indigenous women from the Mughals, who had captured them and were taking them as slaves.

In 1742, when Sikhs were in the jungles of Punjab, one Sikh woman warrior named Bibi Sundari, requested just before she passed away due to the wounds inflicted in battle, to have an Akhand Paath arranged for her. She lay there next to Guru Granth Sahib and listened to the full recitation of this Paath. After kirtan, Ardas and Hukam, she received the Karah Prashad, uttered "Waheguru ji ka Khalsa, Waheguru ji ki Fateh" breathing her last. Thus began the tradition of reading an Akhand Paath in 48 hours.

Akhand paath in other languages

If the Akhand Paath is to be recited in Gurmukhi, then it should be completed within 48 hours. If it is to be done in English, it will need 72 hours to complete.

During an Akhand Paath, if a Hukam is taken at the end of a program, the Paathee (person reading the Paath) reads the Gurbani that they have arrived at in the regular course of reading. They may slow down and read it clearly. In this case, the first and last two lines are not repeated. When the Paathee reaches the end of the Hukam, they continue in the reading of the Akhand Paath.

Akhand path is supposed to be read loud, clear and also each word should be correctly pronounced. It is essential for a person to understand the words that are being recited.