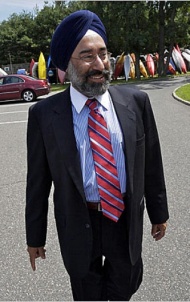 Harvinder Singh 'Harry' Anand a Sikh is the mayor of an affluent village, Laurel Hollow, in New York State, USA. He graduated from Punjab University with a degree in chemical engineering. After his postgraduate degree at Hofstra University on Long Island, he became a businessman. He is said to be the first minority to be mayor of this 95%-white community with only 5% being of African, Mideastern or Asian decent.

LAUREL HOLLOW, N.Y., July 28 — Harvinder Anand, the new mayor of this Long Island village of multimillion-dollar homes, private beaches and yachtsmen, is, like many other residents, a successful business executive, a boater and a connoisseur of world travel. His Sikh turban and beard drew double takes when he moved to the community about 10 years ago, but it does not get many anymore. At least not among the locals. See This ‘Harry’ Stands Out From the Crowd , See below for more of the story.

- This ‘Harry’ Stands Out From the Crowd - New York Times